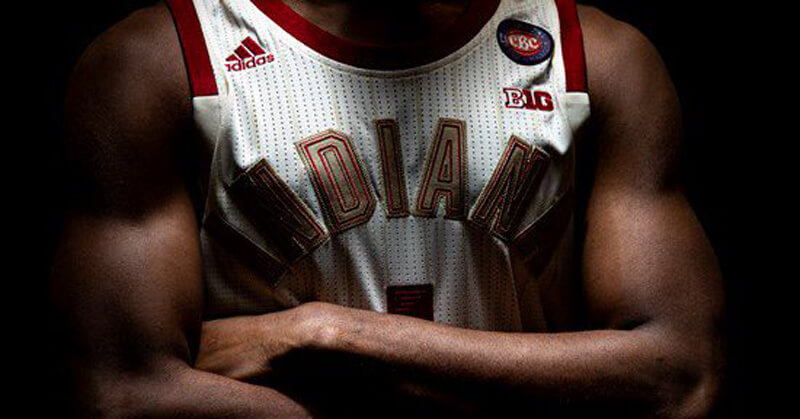 You can get a closer look at the uniforms at this link.

BLOOMINGTON, Ind. – In recognition of Black History Month and the 70th anniversary of IU great Bill Garrett breaking the Big Ten Basketball color barrier, adidas and the IU Men’s and Women’s Basketball programs will unveil special uniforms during home games next week. In addition to recognizing Garrett’s enormous impact on the sport, the uniforms also honor the Harlem Renaissance Movement of the early 20th Century and its impact on the African-American community and the sport of basketball.

One of the special features of the men’s uniform is a silhouette logo of Garrett on the team’s cream-colored, long-sleeve shooting shirts. The legendary Hoosier starred for Coach Branch McCracken’s Hoosier teams from 1948-51, and is one of the most important figures in the history of both IU and Big Ten basketball. On Dec. 4, 1948, he started the Hoosiers’ season-opening game against DePauw, becoming the first African-American to start a Big Ten basketball game, shattering Big Ten basketball’s color barrier.

Garrett went on to a legendary Hoosier career, earning All-America honors in 1951 and departing as IU’s all-time leading scorer with 792 points. While he was the only African-American to play varsity for a Big Ten team during his college career, his success paved the way for others to follow suit soon afterwards. During the 1951-52 season, seven African-Americans played varsity for various Big Ten teams, bringing an end to the Big Ten Conference’s unwritten rule prohibiting African-Americans from participation in varsity basketball contests.

“We are proud to wear these special uniforms to honor Bill Garrett and his critical role in integrating the Big Ten and expand the growth of basketball through expanded opportunities for African-American players,” said IU Vice President and Director of Intercollegiate Athletics Fred Glass. “As the university that broke Big Ten Basketball’s color barrier 70 years ago, Indiana University is very proud of its leadership role in racial integration and the social justice it reflects.”

In addition to celebrating Garrett, the uniforms also give a nod to one of the most influential movements in African-American history – the Harlem Renaissance, a creative movement that sparked a new cultural identity. In this era, the Renaissance ballroom became a place where local basketball teams perfected their game on the same wooden floors used for ballroom dance events and jazz shows. Together, the Harlem community infused their spirit of dance and sport within their day-to-day lives, and created an indisputable marriage between music, culture, and the game.

Similar in look and style, adidas designed both IU programs’ uniforms with the traditional colors of cream and crimson. Each uniform features a unique bean stitch texture around the Indiana team name, the word “BALLROOM” on the inner waistband of each short, and a “Celebrating Black Culture” patch. The CBC patch is in recognition of adidas’ Celebrating Black Culture program, which serves as a way to honor the past not only throughout Black History Month, but throughout the year. The collection also includes corresponding footwear silhouettes which echo the colors of the jazz ballrooms so important to the era.

Each uniform detail is meant to be an homage to the art, poetry, sounds and sport of the Renaissance, and to those driving their passion forward.

Among the most famous venues of the era was Harlem’s legendary Renaissance Ballroom and Casino. Located at the intersection of Seventh Avenue and 137th Street in Harlem, the Renaissance Ballroom and Casino opened in 1923 as a locally owned and operated, multi-purpose entertainment complex that featured movies, plays, assemblies, dancing, and sports – most notably, basketball. During an era when sports – like the rest of society – was largely segregated, the Ballroom was the venue where many of the best African-American players from New York City and Philadelphia came to play, converting and utilizing a second-floor ballroom as their home court.

Shortly after opening, the Renaissance Ballroom and Casino formed a competitive basketball team, the Renaissance Big Five. Under the leadership and ownership of Coach Bob Douglas, the “Rens” became the first all-black, black-owned professional basketball team. In an era that predated the NBA, the Rens barnstormed the country and were the dominant professional team of any color and from any location in the country. In 1939 they won the inaugural World Championship of Professional Basketball in Chicago, earning the label of World Champions. A year later they lost in the tournament to the eventual champion Harlem Globetrotters, and in the final World Championship competition in 1948, they lost in the final to the George Mikan-led Minneapolis Lakers. Before the Rens disbanded in 1949, they compiled a 2,318-381 record over their 27-year history.

Douglas was the first African-American inducted into the Naismith Basketball Hall of Fame in 1972, and has since been joined by Rens players Charles ‘Tarzan’ Cooper, William ‘Pop’ Gates and John ‘Boy Wonder’ Cooper. In addition, the Rens’ 1933 team was enshrined into the Hall of Fame as a group, honoring that team’s 88-game winning streak during an 86-day stretch.

Indiana is among a select group of schools that will have its Harlem Renaissance Collection available for purchase later this month at Adidas.com.