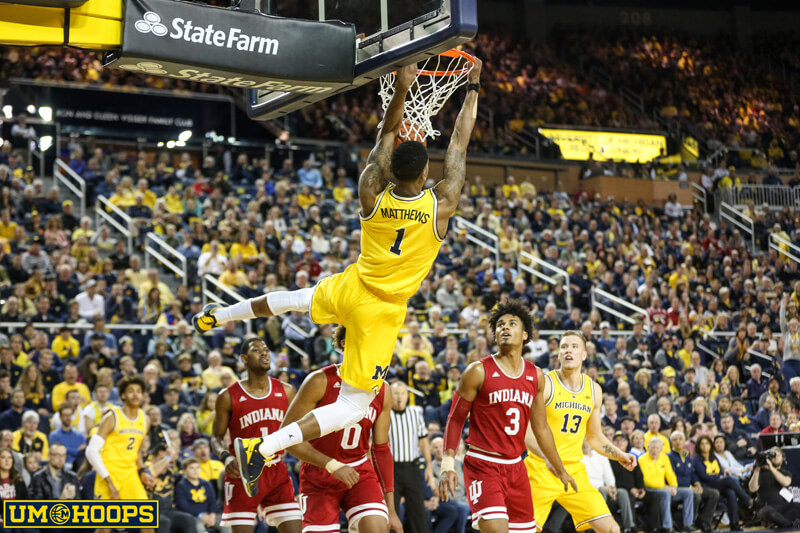 How it happened: It was another rocky start for Indiana and this time, the Hoosiers were up against an opponent that wouldn’t relinquish their lead. Michigan, the nation’s No. 2 team, took it to Indiana in the game’s early minutes and built a 19-point lead less than 12 minutes into the contest. By halftime, the Michigan lead was 15 as the Wolverines scored 1.44 points per possession with an effective field goal percentage of 65. Most of the damage came courtesy of Charles Matthews (16 first half points) and Jordan Poole (12). The slow start, which was driven somewhat by early foul trouble for Romeo Langford and Juwan Morgan, would prove too much to overcome. Indiana never got closer than seven in the second half as Michigan cruised to its fourth Big Ten win and Indiana’s seven-game winning streak came to an end.

Standout performers: It wasn’t done with his normal efficiency, but Juwan Morgan poured in a game-high 25 points on 9-for-22 shooting in 27 minutes. Morgan battled foul issues all afternoon. Romeo Langford added 17 points (5-for-11 shooting, 6-for-6 free throws) in 31 minutes.

Statistic that stands out: Indiana allowed Michigan to score 1.27 points per possession, which is the highest mark an opponent has managed against the Hoosiers this season by a significant margin. Coming into the game, Indiana hadn’t given up more than 1.14 points per trip and that came back in November against Duke.