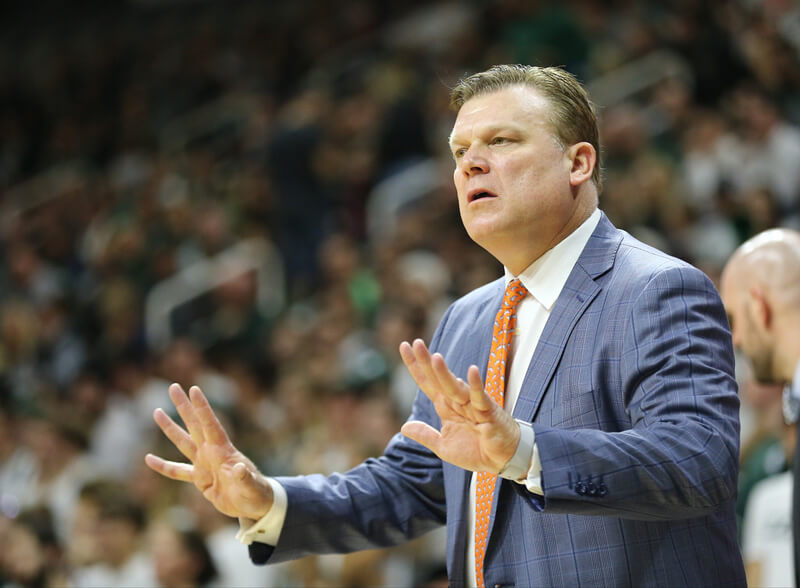 After an 11-day layoff, Indiana returns to action on Thursday night at Simon Skjodt Assembly Hall. The Hoosiers will host Illinois, which is coming off of an overtime loss in Champaign to Florida Atlantic. The Illini are 4-9 overall and 0-2 in Big Ten play.

The game will be broadcast at 7 p.m. ET on FS1 with Dave O’Brien and Bill Raftery on the call:

When Archie Miller, Chris Holtmann and Brad Underwood were hired to their respective Big Ten posts in the spring of 2017, all three hires were lauded nationally.

While Holtmann had huge success in year one taking Ohio State to the NCAA tournament and Miller has Indiana trending upward and in position for a tournament bid in season two, the Underwood era is on shaky ground in Champaign.

Illinois finished just 14-18 last season and barring a major turnaround, the Illini might be lucky to win more than eight or nine games this season. As of Wednesday morning, Illinois is behind Rutgers in the KenPom ratings. The latest setback for the Illini came last weekend when sub-200 KenPom Florida Atlantic came into the State Farm Center and left with a 73-71 overtime victory.

Despite all the negative energy surrounding the Illinois program, this isn’t a contest Indiana can afford to look past with a roadtrip to Michigan looming on Sunday. Indiana will have plenty of chances to pick up resume building wins in conference play, but Thursday’s game is one that would go down as a major blemish if the Hoosiers don’t prevail.

Illinois might be the worst team in the Big Ten as of today, but this isn’t a roster completely devoid of talent. The Illini have three players averaging in double figures in sophomore guard Trent Frazier, freshman guard Ayo Dosunmu and senior wing Aaron Jordan.

The 6-foot-1 Frazier averages a team-best 15.9 points per game and is an excellent spot-up shooter, according to Synergy Sports. Frazier ranks in the 98th percentile nationally in spot-up situations at 1.47 points per possession, per Synergy.

He’s also solid in situations as the ball handler in the pick-and-roll at .83 points per possession, which is in the 61st percentile nationally. Frazier is shooting 42.7 percent on 3s this season, but just 43.3 percent on 2s. He also leads the team in assists per game (3) and steals per game (1.9).

Dosunmu was a five-star recruit out of Chicago, but hasn’t lived up to his lofty ranking through 13 games. The 6-foot-5 guard is shooting just 60 percent on free throws, 41.5 percent on 2s and 38.8 percent on 3s. He’s second on the team in scoring at 11.9 points per game.

Jordan was very good in a complementary role last season and has continued his stellar play as a senior. He’s a career 40.1 percent shooter on 3s and is hitting 44.8 percent from deep so far as a senior. His 1.11 points per possession in spot up situations ranks in the 71st percentile nationally, according to Synergy. Jordan is averaging 10.8 points per game.

Junior college transfer Andres Feliz and Da’Monte Williams, a 6-foot-3 sophomore from Peoria, are also logging rotation minutes in the backcourt. Feliz has a higher turnover percentage (23.1) than assist rate (20.1) and is shooting just 30 percent on 3s. Williams is also a poor 3-point shooter (23 percent for his career), but can get into the lane and draw fouls.

Freshman Giorgi Bezhanishvili starts at the five and is averages 9.7 points and 4.8 rebounds in 23.5 minutes per game. In 49 post-up possessions this season, he’s scored 44 points. That ranks in the 60th percentile nationally, according to Synergy.

Another freshman Samba Kane, could also see some minutes at the five with grad transfer Adonis De La Rosa currently sidelined. Kane had eight points last month in a win over UNLV, but hasn’t done much otherwise in his first season.

Illinois is playing the 45th fastest tempo in the country and it’s a strategy worth questioning when you comb through the Illini’s statistical profile.

Illinois does one thing well: force turnovers. Opponents are turning it over on 24.9 percent of their possessions against the Illini, which is impressive. What isn’t impressive is what is happening when opponents don’t turn it over. In 13 games, Illinois is surrendering 53 percent shooting on 2s.

The over aggressiveness on defense is also why Illinois is 341st nationally in opponent free throw rate. The Illini have been outscored by 89 points through 13 games at the free throw line and their opponents have taken 113 more free throws.

The Pomeroy projection is Indiana by 12 and the Sagarin ratings like the Hoosiers by 14.

The concern in this game for Indiana is taking care of the ball and avoiding another slow start. The Hoosiers have started off slow more often than not this season and it’s possible that Indiana will have some rust to shake off after being idle for 11 days. It will also not be a typical Big Ten crowd as students remain on winter break through the end of the week.

A win would push Indiana to 12-2 overall and 3-0 in the league ahead of Sunday’s trip to Michigan, which begins a brutal stretch of four out of five on the road (at Michigan, at Maryland, Nebraska, at Purdue, at Northwestern).