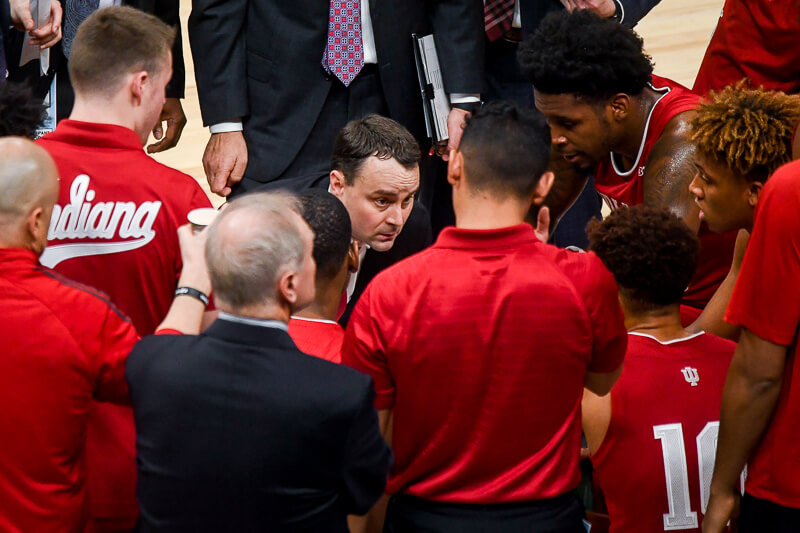 Archie Miller sat down with Don Fischer on Monday for his final radio show of 2018 at the Holiday Inn in Bloomington. IU’s head coach discussed Saturday’s thrilling win over Butler on Rob Phinisee’s buzzer-beating 3-pointer as well as IU’s upcoming games against Central Arkansas and Jacksonville.

Here are some news and notes from this week’s show:

• Miller praised Phinisee’s post defense in the Butler game, saying he was backed down often but did a good job of not fouling and forcing contested looks.

• Miller is pleased with the way IU has played under pressure and said the team is more confident in its defense than its ever been.

• Miller said the execution wasn’t there on the broken play that resulted in Phinisee’s game-winning shot against Butler, but also praised Butler guard Aaron Thompson’s defense in denying Romeo Langford on the play.

• Miller is leaning on the team’s leadership through captains Juwan Morgan and Zach McRoberts to not allow the team’s ranking to cause them to slip up against Central Arkansas or Jacksonville this week.

• Miller thinks final exam week went well for his team in the classroom, but not all grades are in yet.

• In regard to the 11-day gap between the Jacksonville game and the Illinois game, Miller said they usually have a game after Christmas before Big Ten play begins to keep things going, but the long layoff will give the team time to be with their families for the holiday. He added that the extra time can be used in the weight room and in the film room.

• Miller praised the students for the impact they’ve had on home games this year.

• Miller said the long layoff was somewhat intentional to not rush the team back from Christmas and to allow more time to spend more time on themselves in practice before Big Ten play as opposed to preparing for another non-conference opponent.

• Don Fischer mentioned that tickets are still available for the games this week with students on break, and Miller lauded the home-court advantage the Hoosiers have had this season.

• Miller said the emphasis for the Central Arkansas game is less on the opponent and more on trying to improve at what they’re trying to do.

• Miller said the key to getting off to faster starts is improving offensive execution and being more patient on offense early in games, as well as cutting down turnovers.

• When asked about his subdued reaction to the buzzer-beater, Miller said he was disappointed with the way the play broke down, but he was relieved the shot went in.

• Miller said Langford may get more ball-handling opportunities going forward, and he’d like to get the freshman more looks from the middle of the floor instead of the side so opponents can’t deny and trap him as easily.

• Miller has been impressed with Damezi Anderson, Clifton Moore and Jake Forrester in recent practices. He said Moore may be the most improved player on the team.

• Miller said they generally prefer to sit players that pick up two quick fouls in the first half but they try to take it case-by-case.

• Miller tries to break the game down into four-minute segments in between media timeouts and bases some timeouts he calls on how the Hoosiers are looking in that particular segment.

• Miller said he would “demolish” anyone on the team in a shooting competition.