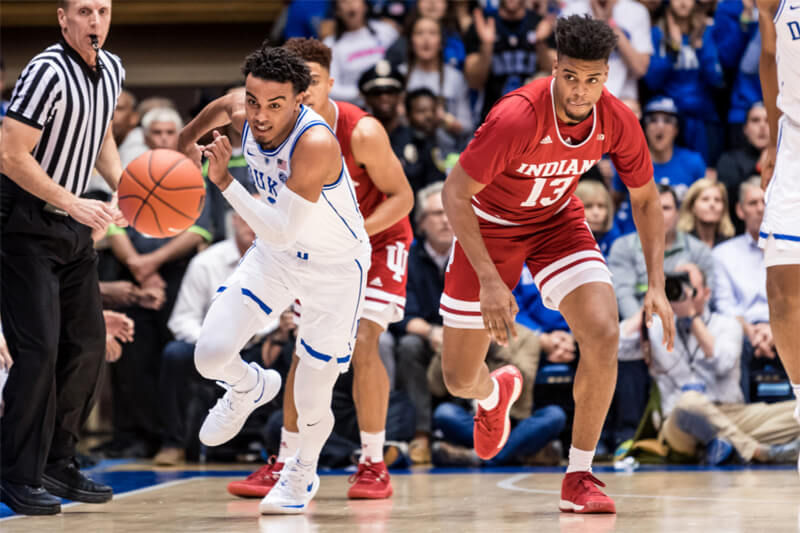 Indiana never challenged Duke on Tuesday night at Cameron Indoor Stadium and as a result, the Hoosiers fell 90-69 to the Blue Devils in the Big Ten-ACC Challenge.

Indiana is now 5-2 this season and will open Big Ten play on Saturday afternoon at Simon Skjodt Assembly Hall. Here’s a look at five takeaways from the loss to the Blue Devils:

• Indiana was crushed from the opening tip: Coming off of a narrow loss to Gonzaga in the Maui Invitational final, Duke looked like a team with something to prove on Tuesday night.

Indiana, however, looked unprepared to answer the immediate flurry of dunks and layups from the Blue Devils in the game’s opening minutes. As a result, this contest was essentially over about seven minutes in when Duke built a 12-point lead.

Despite playing a road game at Arkansas in front of more than 18,000 fans earlier in the month, Indiana simply wasn’t ready for the environment of Cameron Indoor Stadium combined with Duke’s five-star talent.

“It’s an environment game. It’s a tough place to play,” Archie Miller said postgame. “They’ve only won probably 95 percent of their games here over the last 45 years, so I think at some point in time give their crowd a little credit.”

• Indiana’s turnovers set the tone early: Duke is one of the nation’s least experienced teams, but the Blue Devils boast five-star talent at nearly every position.

Indiana doesn’t have that luxury and for the Hoosiers to have a chance to win in an environment like Cameron Indoor Stadium, taking care of the ball is a must.

Duke came into the game ranked just 262nd nationally in terms of forcing turnovers and while the Blue Devils did turn up the ball pressure, most of IU’s errors were self induced.

In the first half, Indiana turned it over 14 times, which turned into 19 points for Duke. In a game with no margin for error, it was simply too much for the Hoosiers to overcome.

“When we turn the ball over the way we did tonight, it’s going to be a recipe for disaster out here,” Miller explained. “Give them credit. They cause a lot of those problems.”

• Duke won all the key matchups: Entering the contest, it was fair to wonder how Indiana would deal with Duke’s four star freshmen.

At point guard, Tre Jones outplayed Rob Phinisee. Juwan Morgan had no answer for Zion Williamson and admitted as much in his postgame comments. And the duo of RJ Barrett and Cam Reddish were far more productive than Romeo Langford and Justin Smith.

The performance of Smith, who had five turnovers in 21 minutes, should be particularly concerning for Indiana. For the second time in IU’s two road games, Smith was benched for the majority of the second half.

Indiana isn’t lacking for talent on its roster, but Duke is just a class above at every position. And Tuesday night proved as much.

• Getting McRoberts and Green back should help IU’s depth moving forward: If there was good news to emerge from Tuesday’s loss, it was the return of Zach McRoberts and Devonte Green.

Green struggled in 20 minutes off the bench as he finished just 2-for-6 from the floor and committed three turnovers. McRoberts scored just three points in 16 minutes.

“We wanted to get them back in there,” Miller said postgame. “I’m hopeful that tomorrow there’s a good report on their health. If we can start sustaining a deeper team in practice every day, I think that’s going to give our best chance at getting better.”

• As bad as this loss was, Indiana needs to learn from it and move on: Indiana wasn’t the first team to lose by 20 to Duke this season and the Hoosiers won’t be the last.

The Blue Devils are the favorite to win the national championship and Indiana won’t face a stiffer test all season.

This is a loss that Indiana simply can’t afford to dwell on or let linger beyond Tuesday.

The Hoosiers have an important stretch coming up with Northwestern, Penn State, Louisville and Butler all coming up over the next 18 days. It could be a season defining stretch as Louisville and Butler represent IU’s final two opportunities to add quality wins to their non-conference resume. And if the Hoosiers want to challenge in the Big Ten, getting off to a solid start in league play over the next week is imperative.