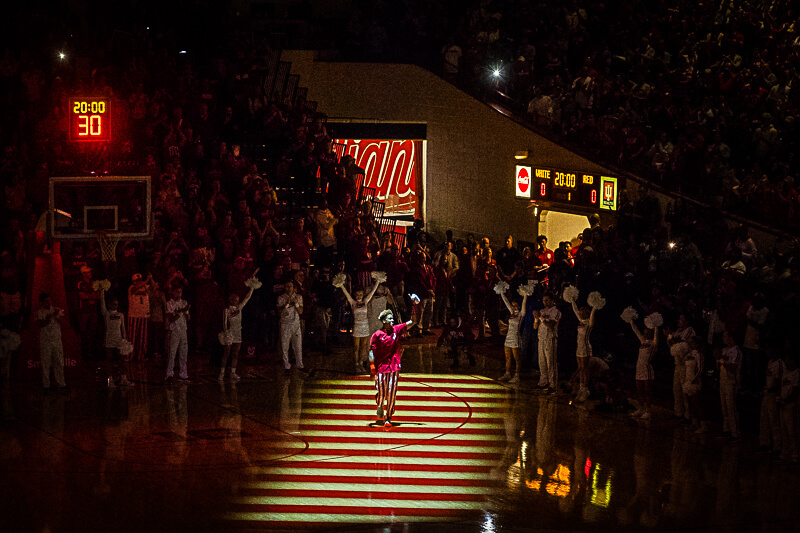 This year’s Hysteria included player introductions for the men’s and women’s teams, a 3-point shooting contest, a dunk contest and a 15-minute scrimmage.

· The most concise Hysteria ever: Not only did Indiana move up the start of Hysteria to 4 p.m., the event didn’t drag along painfully like it has in the past.

The coaching staff kept last year’s Hysteria under two hours, but retained the normal start time of 7 p.m. This year, the event was three hours earlier and was completed in less than 90 minutes.

It was clear that the script was followed tightly as there was no downtime between events and the 15-minute scrimmage didn’t have any clock stoppages until the final minute.

For an event that is built for fans and recruits, it’s important to keep everyone’s attention for the duration. Cutting the fat from the event and making it more efficient has been a positive step for one of the country’s most attended preseason events.

· The fan reaction to Romeo was the evening’s most memorable moment: Romeo Langford admitted Wednesday during IU’s media day that he wasn’t sure what to expect from fans at Hoosier Hysteria.

In terms of how he was received and cheered by IU’s fanbase, Saturday’s introduction was one that Langford is unlikely to ever forget.

Indiana’s Mr. Basketball was the sixth and final freshman to be introduced and the noise was so deafening that the public address announcer in Assembly Hall was drowned out by it.

For a fanbase that is starving to root for a winner after two consecutive seasons of missing the NCAA tournament, Langford offers hope. And that fanbase put its complete adoration of Langford on full display on Saturday.

But the 6-foot-10 big man showed off a shooting stroke on Saturday that could allow him to make an impact similar to what the Hoosiers received from Nick Zeisloft and Max Bielfeldt.

Fitzner isn’t a traditional back to the basket big man, but one of his teammates called his arsenal of post moves “majestic” at Wednesday’s media day. Fans weren’t treated to a glimpse of those post moves during Hysteria’s scrimmage, but they did get to see Fitzner knock down a trio of 3-pointers.

The California native is important for the Hoosiers this season because of his ability to space the floor. Any player who can give Langford and Juwan Morgan more room to operate in the half court will be useful for the IU coaching staff. And Fitzner appears to be capable of doing just that.

· Recruits and fans treated to floor projection show: The new twist for this year’s Hysteria were floor projections that were termed “elaborate” in advance of the event.

That description proved accurate and IU gave the recruits in attendance the best seats in the house in order to view those projections.

All of the recruits in attendance, along with their families, were seated in section J about 10 rows away from the floor to begin the evening. After the introductions were concluded, they were moved down to behind the IU bench area.

Check out the 2018-19 Indiana Hoosiers as they were introduced tonight at #HoosierHysteria #iubb pic.twitter.com/o4LF8Ze06g

· Strong showing of recruits in attendance: As expected, Hoosier Hysteria drew a strong contingent of recruits from around the state.

The obvious headliners were Keion Brooks Jr. and Trayce Jackson-Davis, who were making their official visits to Bloomington.

In addition, class of 2021 in-state prospects Caleb Furst and Khristian Lander were in the building. Bloomington South’s Anthony Leal, arguably the top 2020 player in the state, was also in attendance.