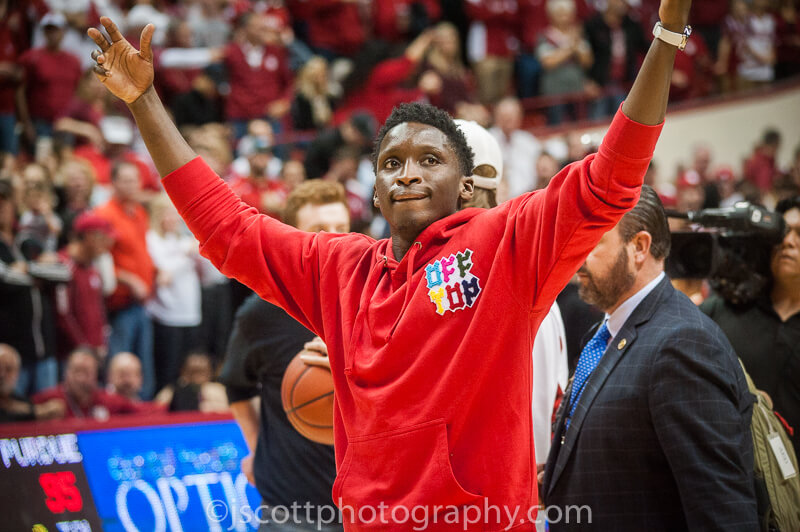 · Sports Illustrated lays out its picks for the 2020 USA Basketball Olympic team and lists Victor Oladipo as one of the 17 names that should be considered:

Among potential USAB newcomers, Oladipo is arguably the most intriguing name. The 2018 Most Improved Player would be a natural face of the 2019 FIBA World Cup team, and it’s possible to envision him on the 2020 Olympic team if Westbrook, Irving and/or Paul decide not to go. Oladipo’s motor, playmaking, and physical defense could make him a nice bit player if Popovich’s 2020 roster has unexpected holes.

· Class of 2019 guard Anthony Harris talked to The Indianapolis Star about his interest in Indiana:

Indiana offered Harris on June 12 and, now that D.J. Carton is off the board, it can pursue him much more earnestly. Harris said Archie Miller is recruiting him as a point guard.

“We talk a lot, he calls me, speaks with me about recruiting. He talks about my play — just to make me better,” Harris said. “Just to get me more confident with the ball. Just being more active. We’ve both got the same kind of mindset. He’s an aggressive coach, I’m an aggressive player. So we can be together a lot.”

· According to reports from Jody Demling and Dan McDonald, Archie Miller started out the third July evaluation period in Orlando:

Archie Miller also here along with assistants from Kansas and Illinois. https://t.co/Z6AtX7nikn

· From earlier in the week, Mike Miller of The Herald-Times provided updated base salaries for IU coaches from a variety of sports, including men’s basketball.

· Jeff Borzello of ESPN.com has everything you need to know about the nation’s top freshmen, including Romeo Langford:

With Langford’s commitment, though, come heightened expectations in Year 2 for Miller at Indiana.

“From a perception point, it was big,” a coach said. “To come up short would have been pretty crushing. From a basketball perception, he’s a really good player. If you can eliminate some of the trappings of being Romeo Langford and playing at Indiana, and just focus on being as good as he can be, he’s going to have a really good freshman year. Archie won’t be into the sideshow stuff. I think he’s picked a good coach to do those things.”

· BTN and Comcast are at odds and it could impact your ability to watch the network this fall and winter, writes Yahoo! Sports:

BTN president Mark Silverman used his time at Big Ten Media Days Tuesday to disparage the television provider for its decision to drop the Big Ten Network from customers’ channel lineups outside of Big Ten markets. That decision, Silverman said, could be the start of a bigger push by Comcast.

“Unlike the usual scenario in these carriage disputes, there is no economic benefit to Comcast at all to do this and removed BTN from their systems outside the Big Ten area, which begs the question: Why did they do this?” Silverman rhetorically asked.

“Unfortunately, my fear is the removal of BTN in the outer market may just be the first step in Comcast’s plan to remove BTN from their systems everywhere, including the Big Ten home markets.”