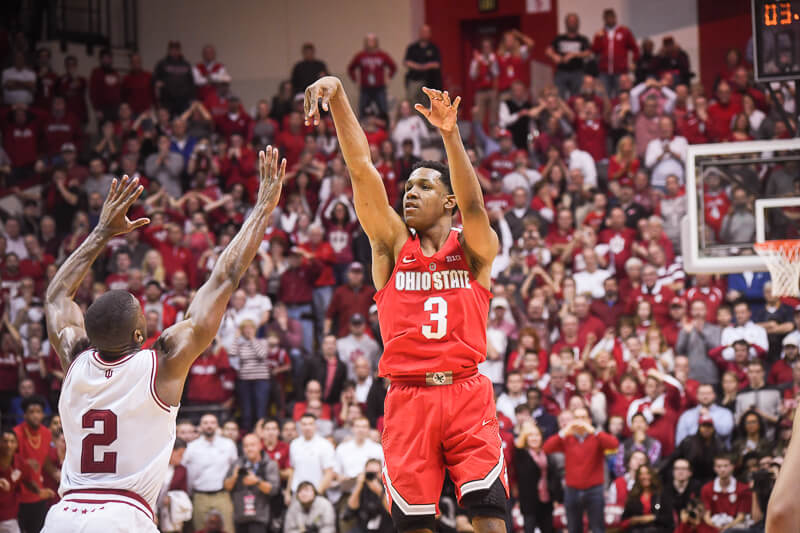 Indiana’s regular season concluded on Friday night with an 80-78 double overtime loss to Ohio State at Simon Skjodt Assembly Hall. The loss dropped the Hoosiers to 16-14 overall and 9-9 in the Big Ten.

Indiana shot just 13-of-23 (56.5 percent) on free throws on Friday and it was one of the reasons the Hoosiers were unable to get over the hump.

With the regular season complete, Indiana is 338th in the country in free throw shooting (64.7 percent) and last in the conference. For a team with little margin for error offensively, consistently bad performances from the line have often been too much to overcome.

· Durham and Smith provide major lift off the bench: Like most freshmen, Al Durham Jr. and Justin Smith have had their share of ups and downs in their first college season.

On Friday, Durham Jr. and Smith showed why they both have a chance to be major contributors the rest of the season and in future seasons in Bloomington. Smith finished with 16 points in 37 minutes and Durham Jr. had seven points in 11 minutes.

The 6-foot-7 Smith has scored in double figures in four straight games.

“I think you’re seeing a guy with a lot more confidence,” Archie Miller said. “I mentioned he’s playing tougher on both ends of the floor. He had some moments tonight where he had a hard time guarding (Jae’Sean) Tate.

“But as a freshman versus a senior, you hope one day you look down the line and he’s able to do that to somebody. But he’s building confidence that in the offseason that he should go into the offseason ready and motivated. And I think he can obviously be a game-changer as a sophomore with the amount of experience he’s gotten.”

· Morgan battles through foul trouble for another productive performance: Despite foul trouble that limited his minutes in the loss, Juwan Morgan put together another solid performance in Friday’s loss.

Morgan played 35 minutes and finished with a team-high 18 points, seven rebounds, three assists, three steals, two blocks and four turnovers. He struggled from the free throw line (5-of-12), but managed to play the game’s final minutes and two overtimes with four fouls.

“He’s given everything he has,” Miller said. “He’s probably running on fumes right now here at the end, the amount of minutes he’s played, what we’ve asked him to do defensively and offensively. He’s had a great year. I hope he’s rewarded for that in the next couple of weeks because he’s earned obviously an All-Big Ten player. If there’s a guy that’s more valuable to their team than he is to ours, that’s going to be debatable there.”

· CJ Jackson made a great play to win the game: When Morgan scored a go-ahead bucket with just over seconds to go, it looked like the Hoosiers would seal up their 10th Big Ten victory.

But as it has all season, Ohio State made a winning play when it mattered. Junior CJ Jackson, who has been terrific in Chris Holtmann’s first season, launched a 25-footer with just over three seconds remaining and connected to lift the Buckeyes to their 15th Big Ten win.

“I haven’t seen the film yet to see what we could have done better,” Miller explained. “That’s a special situation type of thing as a coach that will haunt you for a long time; that with no timeouts, or a made basket coming down full speed, you weren’t organized or weren’t able to get the spot, looked like a broken play.

“But credit him in making a great shot. And they’ve had a heck of a season.”

Friday night was no different as five seniors were honored following IU’s heartbreaking loss. Most of the speeches were brief, but the most memorable of the night came from Robert Johnson, who spoke for seven minutes and showed plenty of emotion.

You can watch the complete speech from Johnson below: