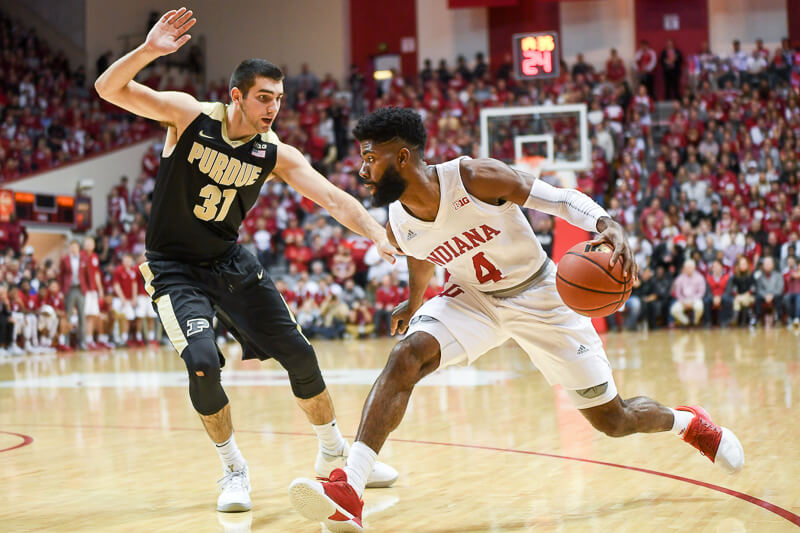 Thoughts on a 74-67 loss to the Boilermakers:

Heading into Sunday’s lone meeting of the season with Purdue, the obstacles facing the Hoosiers were right there in the open for everyone to see.

Indiana was clearly outmatched in the frontcourt. And in perimeter shooting. And in depth. And…

For nearly 37 minutes on Sunday, though, the Hoosiers found a way to navigate each of those challenges and found themselves down just one to the third-ranked team in the country.

But in the game’s final three minutes, Indiana’s other major disadvantage – experience in big moments – reared its ugly head.

Down 65-64 with 3:09 remaining and with possession of the ball, Indiana wilted under the pressure. In the game’s closing minutes, the Hoosiers failed to get a quality shot on the inbound then committed two critical turnovers on offense, both of which led to Purdue points on the other end.

Meanwhile, a tough, seasoned Purdue team executed down the stretch. The Boilermakers calmly stuck with their game plan and fed Isaac Haas in the post for easy scores. Vince Edwards and Carsen Edwards drained four consecutive free throws and the result was a 9-3 run to close the game that allowed Purdue to escape Simon Skjodt Assembly Hall with its sixth win in seven tries over Indiana.

But the loss didn’t come without its share of bright spots for the Hoosiers.

In his pregame comments, Archie Miller hoped that his team’s leaders would rise to the occasion. Juwan Morgan and Johnson did exactly that. Morgan was an absolute beast at times in the post against a much bigger Purdue frontline and finished with 24 points and seven rebounds. Johnson, meanwhile, converted time after time in late shot clock situations and chipped in 21 points of his own.

But perhaps the biggest takeaway was the impact of Miller and the Indiana staff. When Miller’s hire was announced last summer, many lauded the move due to Miller’s chops as an in-game coach – and they were on full display Sunday. Minus a complete dud on that critical in-bounds play with 3:09 remaining, the Indiana staff did a masterful job of compensating for its team’s many deficiencies against the Boilermakers.

Indiana constantly adjusted its defensive approach on Haas. When the senior center started to dominate the paint, Miller went to a quick double-team strategy. When Haas (and the Purdue coaching staff) countered with passing around the double team, Indiana backed off and chose to pressure Haas when he put the ball on the floor. At the end of the day, Haas still finished with a game-high 26 points, but that tally could have been much higher without Indiana’s pressure.

On the offensive end, especially in the first half, the Hoosiers took advantage of Haas’ limited mobility in the half-court and converted on multiple dribble drives designed to make the 7-foot-2 center vulnerable. Multiple ball screens and cuts were aimed right down the lane, preventing Haas from challenging shots and leading to easy lay-ups.

So while Miller wasn’t able to come away with his first signature win in Bloomington, the Hoosiers really had no business being in this game as late as they were. It’s becoming clearer by the day that this team is improving as the season progresses, due in large part to the staff’s ability to adjust and hone a roster not exactly constructed for success.

Now the question becomes where does Indiana go from here?

There are definite signs of progress – including this tight, competitive game against Purdue, clearly one of the best teams in the country and winners of 17 straight.

Unfortunately, the road doesn’t get much easier with the next two games against Ohio State, the surprise team in the Big Ten and Michigan State, which throttled the Hoosiers in East Lansing. If Indiana can split those two and close out this mid-season gauntlet with a bit of momentum, dates with Rutgers, Minnesota, Illinois, Iowa, and Nebraska await and may provide a chance to add some wins to the ledger as conference play draws to a close.