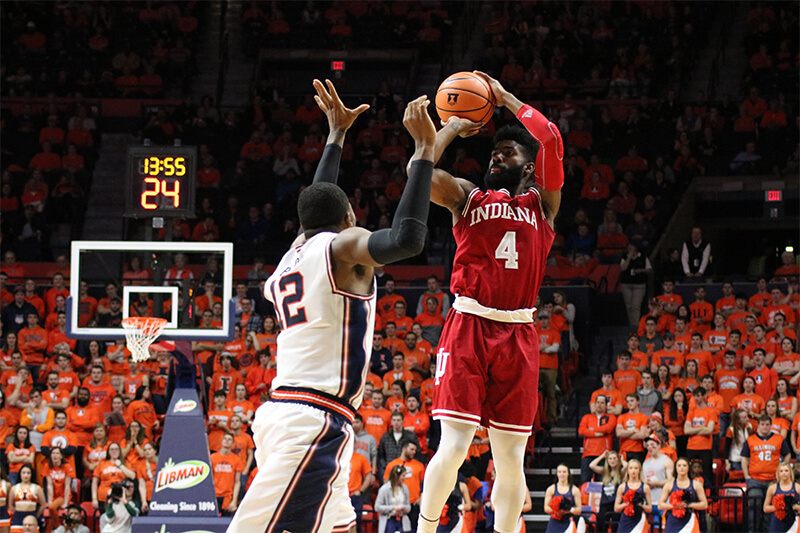 CHAMPAIGN, Ill. – After leading by as many as nine in the first half, missed free throws and turnovers doomed Indiana on Wednesday night at the State Farm Center. The Hoosiers fought, but ultimately fell 73-71 to Illinois.

The loss dropped Indiana to 12-9 overall and 5-4 at the halfway point of Big Ten play. Here’s a look at five takeaways from the loss to the Fighting Illini:

· Poor free throw shooting costs Indiana a win: Winning on the road, particularly in the Big Ten, is no easy task. It becomes even more difficult when you’re playing the most foul prone team in the league, but can’t make free throws.

Illinois entered the game with a league-worst 48.6 percent opponent free throw rate (FTA/FGA). The Fighting Illini had their worst performance of the season in terms of sending their opponent to the line – IU had a free throw rate of 64 percent – but it didn’t matter because the Hoosiers couldn’t convert.

Indiana finished 16-of-29 from the line in the loss and the poor performances came from just about everywhere. Most notably, Juwan Morgan was 3-of-8 and Collin Hartman was 1-of-4.

“Right now we’re not a very good free throw shooting team,” Archie Miller said postgame. “We’ve got to work on it. Like I said after the game to some guys, ‘if you’re struggling from the line, you’ve got to have some pride in your individual game and get in the gym a little bit more.'”

· Illinois gets big edge in points off of turnovers: Indiana did a decent job of taking care of the ball in the first half, but the second half was a different story.

Indiana turned it over on 28.2 percent of its possessions in the second half and the Illini turned 11 Hoosiers turnovers into 14 points. For the game, Illinois scored 22 points off of turnovers to just 11 for Indiana.

Indiana’s turnover percentage in the loss of 25 was its highest since the Seton Hall loss back on Nov. 16.

Illinois simply had no answer for Morgan other than sending him to the free throw line. At the halfway point of Big Ten play, Morgan is one of the league’s most improved players and he showed why again on Wednesday night.

The Waynesville (Mo.) product finished with a game-high 25 points on 12-of-14 shooting and also added nine rebounds, three assists and a steal in 31 minutes.

He finished with a plus/minus of +9, the highest mark on the team in the loss.

· McRoberts continues to become more confident offensively: The days of Zach McRoberts passing up open looks appear to be gone.

McRoberts, who had seven points in Monday’s win over Maryland, scored a career-high 10 in Wednesday’s loss. McRoberts hit a pair of 3-pointers and is now 8-of-21 from deep on the season (38 percent).

That’s the best mark on the team among players with more than 20 attempts.

“I’m just taking open shots when they are there,” McRoberts said postgame. “Guys found me when I was cutting and I was able to put it in.”

· Illinois locks down on defensive glass in second half: After allowing Indiana to grab four offensive rebounds and score eight second chance points in the first half, Illinois cut off the Hoosiers on the glass in the second half.

The Hoosiers managed just .84 points per possession in the second half after scoring 1.15 in the first half.

Indiana played well enough defensively to win, but turnovers, poor perimeter shooting, missed free throws and a lack of offensive rebounding in the second half were ultimately too much to overcome.