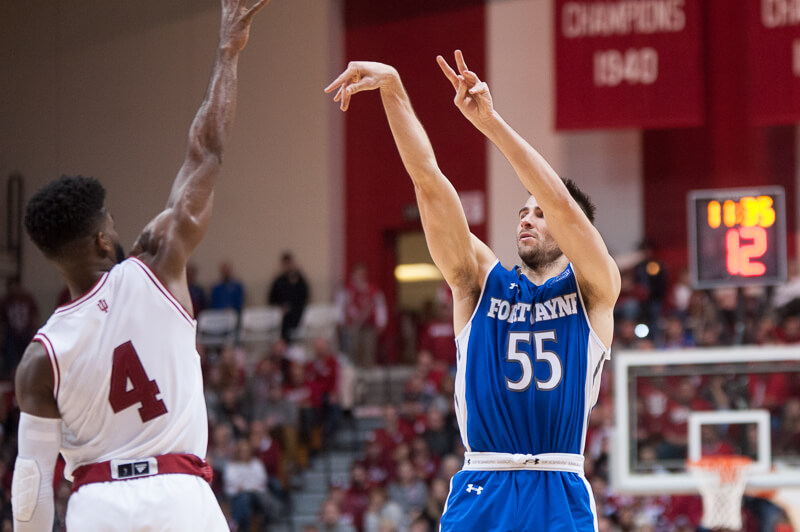 Indiana was crushed on its home floor for the second time this season on Monday night as the Hoosiers fell to Fort Wayne, 92-72, at Simon Skjodt Assembly Hall. The loss, Indiana’s second straight to the Mastodons, dropped the Hoosiers to 6-6 with two non-conferences games remaining.

· It happened … again: In the aftermath of Indiana’s season opening loss to Indiana State, both Robert Johnson and De’Ron Davis talked about things like defensive breakdowns, not playing hard enough and regrouping quickly to get their issues corrected.

A little more than a month later, IU players were responding to another dud performance that looked eerily similar to the loss to the Sycamores.

Like the Indiana State loss, this was no fluke.

Indiana was throughly beaten on its home floor in a game where it was a double digit favorite. The Hoosiers were lucky to lead at halftime. In the second half, they had no answer for Fort Wayne’s barrage of 3-pointers. The Mastodons hit 10-of-17 from behind the 3-point line after intermission and with each make, their confidence grew. Indiana lacked the on court leadership to stop the run as the lead ballooned to 22 points.

For a team that’s beaten Iowa and Notre Dame and hung in against Duke and Louisville, it was a head scratching performance. In the aftermath of this loss, Collin Hartman said Indiana was “not prepared” mentally to play. Twelve games into the season, that’s an issue that raises serious questions about the leadership on this team.

“I think it starts with the older guys, making sure guys are ready to play,” Johnson said. “We’ve been through it the most, so at the end of the day I think, if anybody, it will be up to us.”

· (Unforced) turnovers continue to be a problem: When you examine the first half boxscore, you quickly realize that Indiana was fortunate to lead by one at halftime.

The Hoosiers had 12 first half turnovers that led to 16 Fort Wayne points. The mistakes in the second half, however, were far more costly.

Indiana had six second half turnovers, a manageable number, but Fort Wayne turned those miscues into 13 points. For the game, Fort Wayne outscored Indiana 29-7 in points off of turnovers. And many of the mistakes weren’t even forced.

“They weren’t even turnovers that were, like, forced,” Archie Miller said. “That’s the thing that frustrates you. It’s out-letting the ball to the other team on a rebound, dribbling the ball way too much, dribbling into defense, they can steal it off you. 13 steals is a lot of steals, especially for a team that doesn’t even press, when you think about it.”

· Fort Wayne controlled the pace: Indiana entered Monday’s game ranked in the bottom third of Division I teams in terms of adjusted tempo, according to Ken Pomeroy.

Fort Wayne entered in the top 50 in adjusted tempo. The Mastodons dictated pace and it appeared to make Indiana uncomfortable offensively. In a 40 possession first half, Indiana committed 12 turnovers.

“We personally didn’t have a whole lot of pace the whole game on offense,” Miller explained. “I thought those guys, that’s how they play. They play fast. They play downhill. They got a spread floor most of the time where they have some guys that can really shoot the ball.

· Upperclassmen must lead consistently: Hartman and Johnson have been through a lot in their IU careers. They’ve won big and they’ve lost games they shouldn’t have. In other words, both know what it takes to compete and win at the highest level of college basketball.

Their leadership of this team, to this point, has been too inconsistent. It must be a constant for Indiana to be successful and continue to improve.

Miller, as is his responsibility, shouldered plenty of the blame for the loss in the postgame press conference. But it isn’t all on him. Indiana had more talent, had the advantage of playing at home, but still looked like it was going through the motions in the second half. Coming off of Saturday’s come from behind win over Notre Dame, it was a stunning step backward for the Hoosiers.

· Fort Wayne deserves credit for winning: Fort Wayne probably won’t play in the NCAA tournament or even the NIT unless it wins its league, but this is a win that many of its players will remember forever.

Bryson Scott, who started his career at Purdue and will finish it at Fort Wayne, is 5-0 in his career against the Hoosiers. John Konchar, one of the heroes in Fort Wayne’s win over IU last season, was terrific again.

And Kason Harrell, who had been struggling this season entering Monday’s game, torched IU for 28 points, including 6-of-11 from behind the 3-point line.

“Give Fort Wayne a lot of credit,” Miller said. “Executed their game plan on both ends of the floor really well. Wasn’t close in terms of the approach coming out of halftime. It wasn’t close.”