At the buzzer: Indiana 87, Eastern Michigan 67 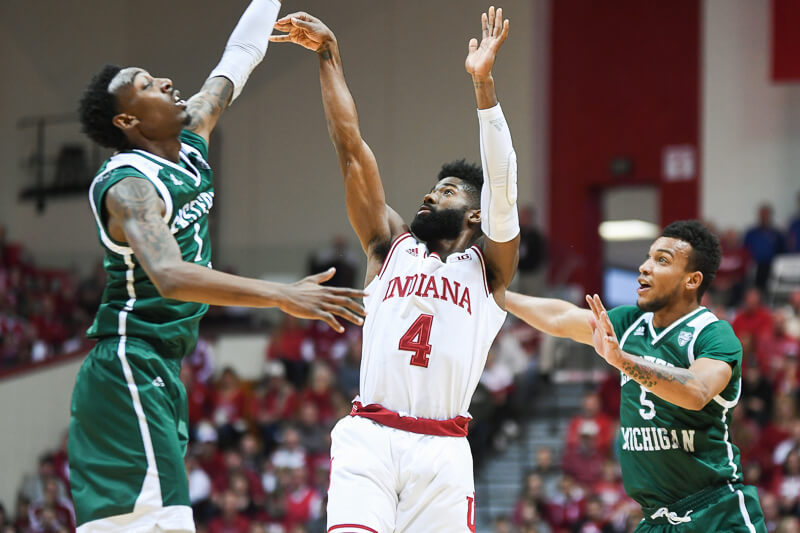 Quick thoughts on a 87-67 win over Eastern Michigan:

How it happened: For 25 minutes, it appeared Eastern Michigan would push Indiana until the final buzzer on Branch McCracken Court. After a Paul Jackson free throw made it 49-47 Indiana with 14:32 to play, Indiana reeled off a run that the Eagles couldn’t recover from. Freddie McSwain tipped in a Josh Newkirk miss. Newkirk followed with a 3 on the next possession. And then Justin Smith brought the crowd to its feet with a dunk in transition that led to an Eastern Michigan timeout. By the 8:42 mark, the lead had ballooned to 18 points and the rout was officially on. On a quick turnaround against a team playing a solid 2-3 zone, it was an impressive win for the Hoosiers, their third straight.

Standout performers: It was a balanced scoring effort for Indiana as four players finished in double figures. Robert Johnson led the way with 18 points on 6-of-8 shooting, Josh Newkirk hit five of his six 3-point attempts and Freddie McSwain came off the bench and finished with 10 points and nine rebounds. Collin Hartman also made his season debut and had three points in six minutes.

Statistic that stands out: Indiana had single digit turnovers for the second straight game. The Hoosiers finished with eight turnovers and a turnover percentage of 13.1.