What to expect: South Florida 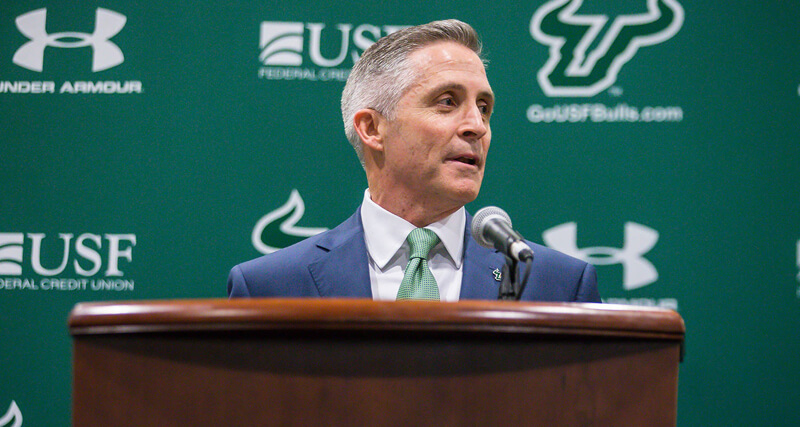 Indiana will look to bounce back from Wednesday’s loss to Seton Hall in the Gavitt Tipoff Games on Sunday evening when South Florida comes to Bloomington. It will be the second of four games for Indiana in the Hoosier Tipoff Classic.

The game will be broadcast on BTN at 6 p.m. with Brandon Gaudin and Bob Wenzel on the call:

Three games into the 2017-18 season, there aren’t a ton of positives to glean from Indiana’s start.

The Hoosiers were blown out at home by Indiana State to open the season and then beat Division I doormat Howard by nine just two days later. In its first road test of the season, Indiana kept it close for a half before being blown out in the second 20 minutes by Seton Hall at the Prudential Center in Newark.

In a season of transition under first year coach Archie Miller, Indiana doesn’t have much time to fix its issues. An unforgiving schedule, which includes a pair of early December conference games, doesn’t have the cupcakes that Indiana has feasted on in the past.

This upcoming three-game stretch, which includes contests against South Florida, Arkansas State and Eastern Michigan in Bloomington, is an opportunity for Indiana to gain some confidence before this five-game gauntlet arrives: Duke, at Michigan, Iowa, at Louisville and Notre Dame on a neutral court.

After three awful seasons under Orlando Antigua, South Florida hired Brian Gregory in March. Gregory, who was at Dayton before Archie Miller and then spent five seasons before being fired at Georgia Tech, spent last season working as a consultant for Tom Izzo at Michigan State.

Gregory has a tall task ahead to lift the Bulls to respectability in the American Athletic Conference. South Florida was picked to finish last in the league this season and is starting three graduate transfers.

All three starting guards for South Florida are seniors and all are new to South Florida’s program. Two of them – Payton Banks and Terrence Samuel – played at Penn State last season.

Samuel is the team’s second leading scorer through three games at 12.3 points per game. The 6-foot-3 guard is shooting close to 56 percent from the field and has taken 16 free throws in three games. He also has 17 assists, six steals and just four turnovers.

Banks, who started 13 games for Penn State last season and averaged 10.2 points per game, is the team’s fourth leading scorer at 10 points per game. Stephan Jiggetts, who transferred from Farleigh Dickinson, has been high usage and low efficiency through three games. The 6-foot-1 guard is using 25.3 percent of the team’s possessions and is shooting just 35.5 percent from the field.

A pair of freshmen – David Collins and Justin Brown – come off the bench to provide backcourt and wing depth.

The headliner in the frontcourt is redshirt sophomore Tulia Da Silva, the team’s leading scorer and rebounder. The 6-foot-7 forward is averaging 14 points and seven rebounds through three games.

The Bulls are splitting time at the five between 7-foot-2 junior Nikola Scekic and 6-foot-11 junior Malik Martin, who comes off the bench but is the more productive player of the duo. Martin is averaging 6.3 points and 3.7 rebounds in 20 minutes per game.

South Florida comes to Bloomington with wins over Florida Atlantic (home) and Stetson (road) and a loss to Morgan State (home).

In terms of style, South Florida’s deliberate tempo and inability to force turnovers both stand out through three games. The Bulls are averaging just 68 possessions so far, which ranks 344th nationally in terms of pace, according to Ken Pomeroy.

For Indiana, figuring out a way to guard the 3-point line is a major key to showing some progress defensively. Through three games, the Hoosiers are allowing opponents to shoot close to 51 percent from distance. At his radio show on Thursday night, Miller stressed the importance of his team continuing to progress in the pack line defense.

As we’ve seen thus far, these numbers mean little when attempting to forecast how this Indiana team will play. The Hoosiers were a big favorite against Indiana State and were blown out and only beat Howard, a bottom 20 Division I team, by nine.

Even though it’s early in the season, this is the beginning of a crucial three-game stretch for Indiana. The Hoosiers will be solid favorites in each of the next three contests and with the loss to Indiana State, can’t afford another slip up.

The key numbers to watch on Sunday are straight forward: Number of 3-pointers made (and percentage) for South Florida and number of turnovers (and turnover percentage) for the Hoosiers.