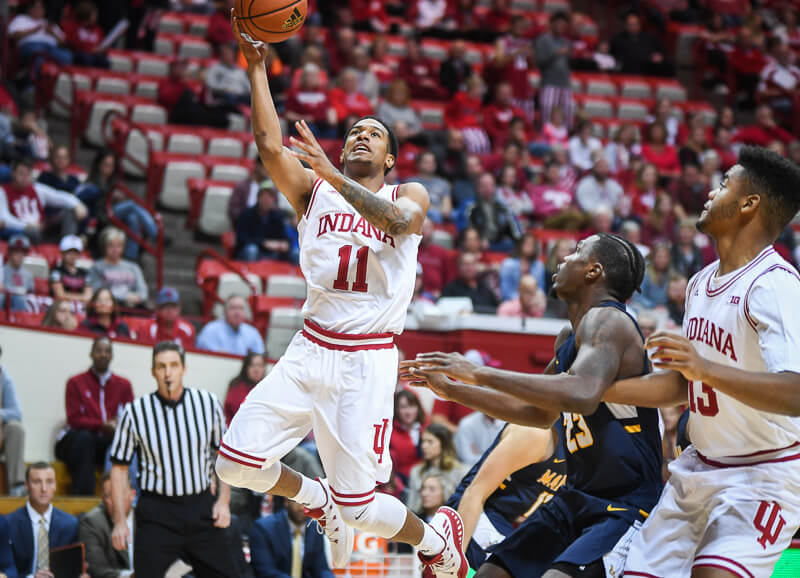 Quick thoughts on a 93-62 exhibition win over Marian:

How it happened: The Knights, an NAIA program led by former Carmel head coach Scott Heady, kept it close for a half thanks to hot 3-point shooting. Marian was 6-of-14 from distance in the first half, but Indiana still held a comfortable 12-point lead at the break. Had a few late shot clock attempts not gone in for the Knights, Indiana probably would have led by closer to 20 at the half. The revamped Hoosiers looked more fundamentally sound defensively, particularly on the perimeter. Some rotations and closeouts were still sloppy early, but Indiana’s technique is clearly improved. And in the second half, the defensive intensity began to eat away at Marian’s legs as the Hoosiers pulled away for a comfortable win. It’s just an exhibition game, but the Archie Miller era got off to a positive start on Saturday night.

Standout performer: Sophomore Devonte Green picked up right where he left off at Hoosier Hysteria. Green was aggressive (and efficient) offensively as he finished with 22 points on 9-of-14 shooting. Beyond the points, Green also chipped in seven assists and six rebounds in 30 minutes.

Statistics that stands out: Indiana held Marian to .86 points per possession and turned it over on just 13.6 percent of its possessions.