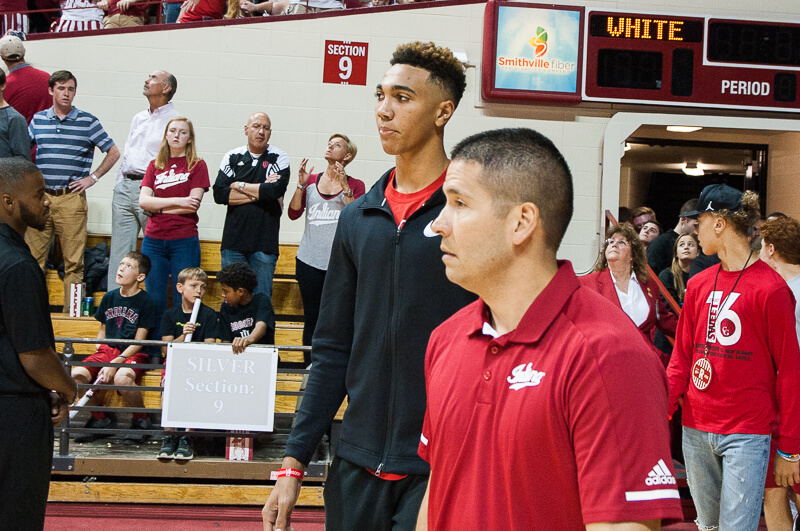 Center Grove forward Trayce Jackson-Davis is one of Indiana’s top priorities in the class of 2019 and a top 50 prospect nationally.

Jackson-Davis was on Indiana’s campus three times in the past week and talked to Inside the Hall on Sunday afternoon about what he learned on the visits, Hoosier Hysteria and much more. Our full Q & A is below:

On what he learned this week on his three trips to Bloomington:

“The two times I’d visited before were just for football games. On Monday when I went, I had more time to spend more time with coach (Archie) Miller and talk. He was showing me where I’d fit in on the offense and stuff like that. It was more getting to know the program (on Monday), getting to see the players, see practice.”

On his impressions of Archie’s presentation on how he’d fit in at Indiana and also from watching practice:

“They run an offense that is similar to my high school offense. I thought that was pretty cool because I’m already kind of used to what they do. I think I fit in pretty well. They’d let me play my game and not just force me to be on the block and do stuff on the block. They’d let me do other things and be more versatile.”

On what stood out at Hoosier Hysteria:

“I thought it was a really awesome experience because some of the other places I’ve been to, they showed the recruits love, but not like that. Coach Miller really put an emphasis on the recruits. I thought the fans were really, really engaged and I really liked that. It was just a really, really good time.”

On whether he was recognized by fans throughout the event and how it made him feel:

“Yeah, I thought it was pretty cool. I’ve had a little bit of that in high school, but not on that level. That was awesome.”

On the emphasis Archie is putting on the top in-state recruits for 2019, including Trayce and Keion Brooks Jr.:

“I think he puts a huge emphasis on us. I think he’s really showing us how much we mean (to the program). With Keion and I, I think he’s trying to tell us that if we play there together, we’d be a force to be reckoned with. With us being in-state and everybody already knowing us and all the fans, I think it would make it even better.”

On the reception received by recruits as they walked across the floor at Simon Skjodt Assembly Hall:

“I didn’t expect it at all. I thought we were just going to walk around and we walked straight through. I was like, ‘OK.’ And then everybody just started clapping. That was really cool.”