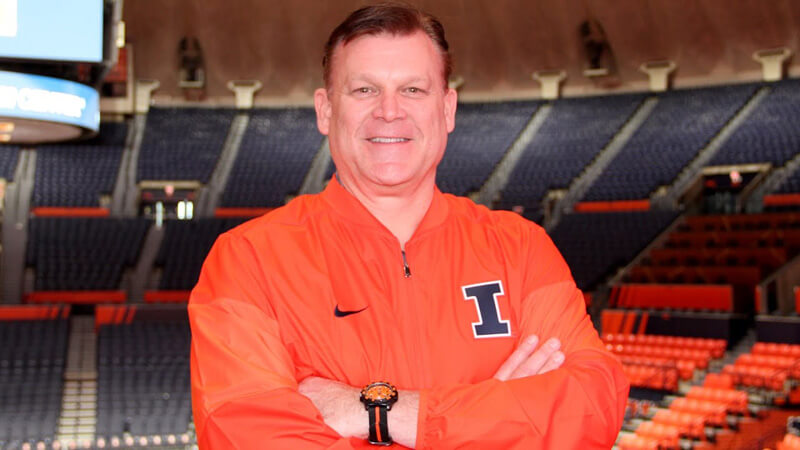 With the start of college basketball season on the horizon, we’ll be taking a long look at the conference at large as well as Indiana’s roster over the next month. Today, our Big Ten team previews continue with a look at Illinois.

John Groce, who was 95-75 over five seasons in Champaign, was dismissed on March 11 and replaced a week later by Brad Underwood. A long time assistant, Underwood spent four seasons (2013-2016) building Stephen F. Austin and parlayed that into the Oklahoma State job in 2016. After just one season in Stillwater, Underwood agreed to a six-year, $18 million deal to take over Illinois.

Not only will Illinois have new leadership on the sidelines, the roster will also look much different in year one of the Underwood era. The Illini lost Tracy Abrams, Malcolm Hill, Jaylon Tate, Maverick Morgan and Mike Thorne to graduation. Jalen Coleman-Lands transferred to DePaul and D.J. Williams transferred to George Washington.

The talent remaining for Underwood to work with in his first season in Champaign is a mixture of role players and a few key signees from the spring that should make Illinois competitive, but also a long shot to get back to the NCAA tournament.

The two key returnees in the frontcourt are a pair of juniors: former top 50 recruit Leron Black and Michael Finke. Black averaged 8.1 points and 6.3 rebounds per game last season and was 22nd nationally in defensive rebounding percentage. His offensive game, however, has a long way to go. Black shot just 29.7 percent on 3s a season ago and 48.4 percent on 2s. Finke is a 6-foot-10 four-man who likes to operate on the perimeter. He hit 40.9 percent of his 3s last season.

Sophomore forward Kipper Nichols, who played in just 21 games last season, should get a chance to take on a bigger role with all of the roster attrition. At 6-foot-6 and 225 pounds, Nichols can play both forward spots.

Illinois will be hard pressed to replace Malcolm Hill on the wing, but the signing of Wright State graduate transfer Mark Alstork should help in that regard. Alstork averaged 19 points per game last season and should be the clear cut first option offensively for the Illini.

In the backcourt, sophomore Te’Jon Lucas should be the primary point guard after averaging 4.8 points and 3.1 assists per game last season. Lucas had a higher turnover percentage than assist rate last season, but was a solid on-ball defender. Freshman Trent Frazier, a four-star recruit, should also get minutes at the point.

Freshman Mark Smith turned down offers from Michigan State and Kentucky to sign with the Illini and could be a day one starter after earning Mr. Basketball honors in Illinois. Smith finished as a consensus top 100 recruit in the 2017 class.

Junior Aaron Jordan, who played sparingly under Groce but was a former top 150 player, is a career 31.6 percent 3-point shooter with a chance to crack the rotation.

Bottom Line: Underwood turned Oklahoma State from a 12-20 team to the NCAA tournament in his one season at the helm, but the path in Champaign won’t be as easy. While the middle of the conference is wide open, Illinois lacks depth and is young at point guard and in the post. While Underwood hasn’t shied away from expectations, it would be very surprising if Illinois is anything more than an NIT team this season.

Quotable: “I think we should be an NCAA Tournament team next year. I like our pieces and I like our toughness and grit. I think Mark Smith, who we just signed, has a chance to be one of the best freshmen in the country. We should be right there in the middle [of] things in the Big Ten.” – Underwood to Jon Rothstein on the College Hoops Today Podcast.