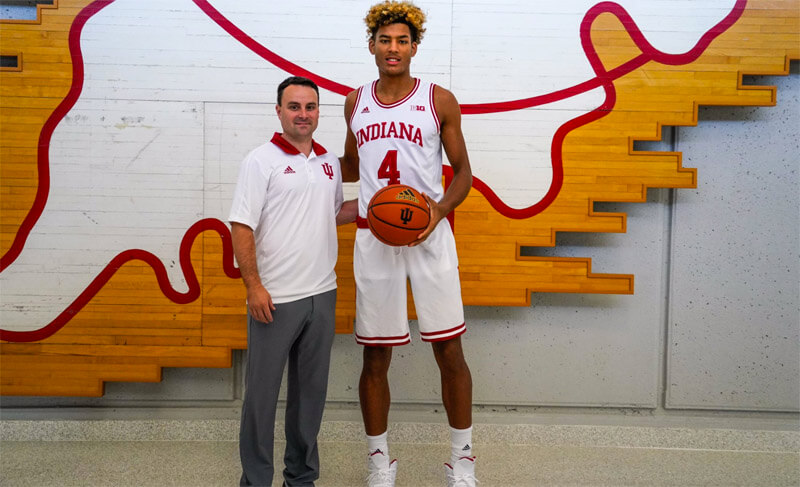 Inside the Hall spoke with Forrester’s father, Dwight, about his son’s decision to commit, where he projects to play in college, the family’s comfort level with the IU program and much more. Our full Q & A follows:

On the official visit and why Jake decided it was time to commit:

“I think coach Archie (Miller) and coach Bruiser (Flint) and the guys on staff, they laid it out for him and they made him feel like he belongs. That had everything to do with it. They made him feel like family. They made him feel comfortable. And they let him know that he would play a significant role as a freshman. He has the ability to play a significant role as a freshman. And that’s what he wanted to hear. On top of that, it’s Indiana basketball. One of the most prestigious basketball programs in the country. Why wouldn’t you want to be a part of that?”

On what most impressive about the visit:

On the role the coaching staff envisions for Jake:

“He’s a hard worker. Jake goes up and down the floor. He plays hard and he runs hard. Miller’s style, if you look at his style of play from Dayton, his players run hard and play hard. And Jake runs hard, he plays hard. He defends. He can defend from two to five. If you look at Archie’s program and his body of work from Dayton and if he’s going to bring that same body of work to Indiana, that’s a perfect fit for him. That’s a perfect fit for my son.”

On where Jake is right now as a player and his long term upside:

“I think his upside for me, as a dad and I might be a little bit biased, but I don’t think anybody works as hard as he does. My son is a hard worker. He works hard and he plays hard. He has a motor that is unbelievable. He defends, he blocks shots and he rebounds. At 6-foot-10, not 6-foot-8 or 6-foot-10 on paper, but a legitimate 6-foot-10 young man, but not many schools or the schools that were on his list, had anybody like him. He’s 6-foot-10, can run like a deer and plays hard 24/7.”

On his position and where he’ll play:

“He’s more of a four. He’s definitely a stretch four. He can put the ball on the floor. He can shoot 3s. He’s definitely a four. I’d be lying to anybody if I said my son was a three or even had aspirations of being a three. And the way basketball is going now, basketball is about to be position-less. It’ll just be five guys who play hard and win. And do what it takes to win. And my son is one of those guys.”

On what Archie has told the family about his vision for IU basketball: