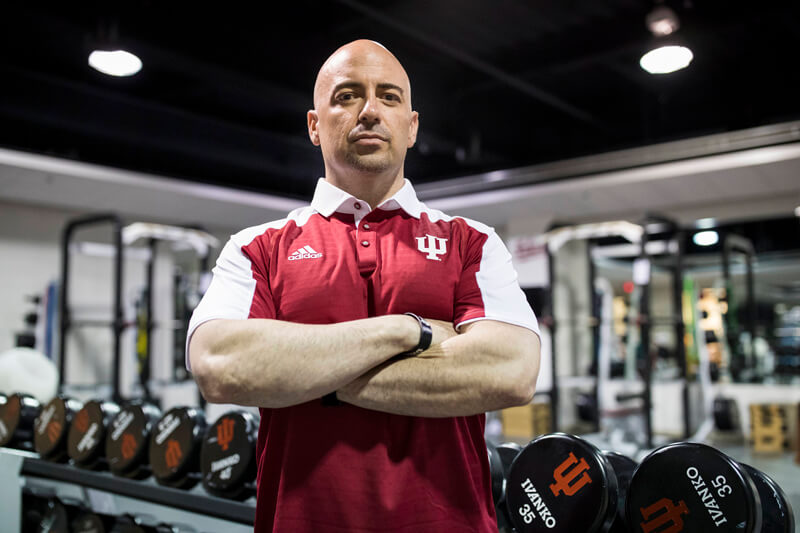 Indiana announced on Thursday afternoon that Clif Marshall has been hired as the director of athletic performance for men’s basketball. Marshall replaces Lyonel Anderson, who was not retained following last month’s coaching change in Bloomington.

Here’s the full release – via IU media relations – on the hiring:

BLOOMINGTON, Indiana – Indiana University men’s basketball coach Archie Miller has announced that Clif Marshall will join the staff as the team’s Director of Athletic Performance. Marshall comes to IU after spending 10 years as the Performance Director at Ignition Athletics Performance Group where he was responsible for the design and implementation of both the strength and speed programs. Ignition is based out of Cincinnati, Ohio and has trained more than 10,000 athletes, including standouts in the NBA, MLB, MLS, and the NFL.

“I think Clif is a difference maker,” said Miller. “He brings a wealth of experience and has worked with some of the top athletes in their respective professions. His ability to motivate and get the best out of those he trains will be a great asset. This position is as critical as any you have on our staff and we are excited to welcome him, Stacey, Mary Grace and Harrison to the Hoosier family.”

With 15 years of professional experience, Marshall has personally trained more than 400 pro football players, including first round NFL Draft Picks, Super Bowl Champions and Pro Bowlers. AJ Green, Luke Kuechly and Geno Atkins have been some of Marshall’s most notable clients. Under Marshall’s direction Ignition has trained over 40+ NFL Combine Top Performers and a number of NFL Players who hold all time combine records for their position groups. Currently Ignition and Coach Marshall have at least one player that they have trained on all 32 NFL Clubs.

Marshall also worked as a Fitness Ambassador for the NFL during the 2015 and 2016 seasons. As part of his job he wrote training articles for nfl.com and helped produced video content of his workouts for NFL Network with a number of his top clients.

During his tenure, Ignition has been featured in Muscle & Fitness, USA Today, CBS Sports, Eastbay, ESPN, and on NFL.com. In 2010 he was featured in a motion picture film called Late Rounder’s which followed the path of four NFL Draft prospects in which he personally trained.

Prior to his role as Performance Director at Ignition, Marshall served as a strength and conditioning assistant for the Cincinnati Bengals. He has continued to work closely with the Bengals as a consultant to Head Strength Coach, Chip Morton since 2005.

Marshall has also worked as a consultant to some of the top NCAA athletic programs in the country including the men’s basketball programs at Xavier and Dayton. Since 2014, Marshall has trained the Musketeers by leading a 10-week summer speed and agility program through a partnership with Ignition. In the summer of 2015, he implemented the Dayton Flyers strength and conditioning program for Archie Miller’s club that won the Atlantic 10 Championship.

Marshall served as a strength assistant for the University of Louisville Football Program from 2000 until 2004. In 2004 the Cardinals went 11-1 and were ranked #6 in the final AP bowl.

Marshall, 36, is married to the formerStacey Snopek and they have two children, Mary Grace and Harrison. He is active in Christian non-profit organizations including Focus Ministries, Fellowship of Christian Athletes, The Lord’s Gym and Athletes in Action.

AJ Green
6x NFL Pro Bowler | Top 10 Draft Pick
“I’ve known Clif Marshall since my rookie year in the NFL. I’ve used him as my personal trainer because he believes in training the Total Athlete. His performance program focuses on improving fast twitch muscle which is exactly what I need to continue to play at a Pro Bowl level each year with the Bengals. I have appreciated his wisdom as it has made me more of a complete athlete.”

Luke Kuechly
NFL Defensive MVP | Top 10 Draft Pick
“I’ve spent each of my NFL Off Season training with Clif Marshall. I like his holistic approach that allows me to train speed, power and stamina all in the same session. His workouts are always specific to my position.”