Indiana statement on four players who have declared for NBA draft 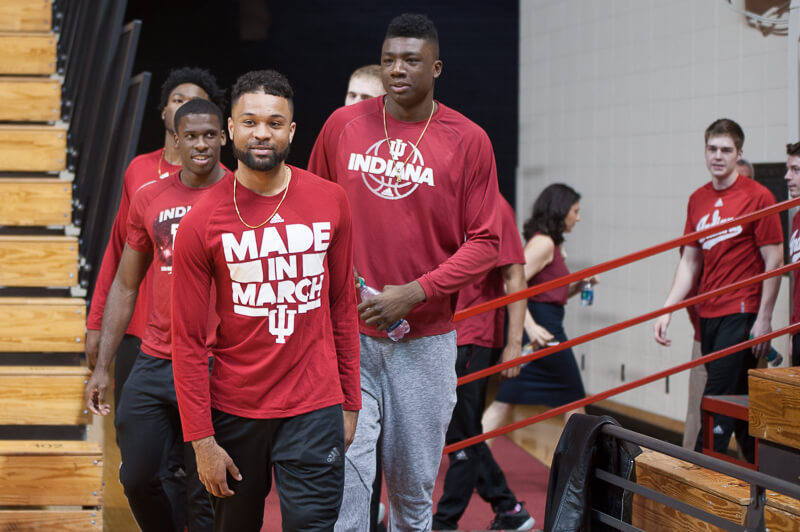 Here’s the full release, with quotes from Archie Miller and all four players, from IU athletics:

Four members of this year’s Indiana University men’s basketball team will put their names in for the 2017 NBA Draft. Junior guards James Blackmon, Jr. and Robert Johnson and sophomore center Thomas Bryant will not hire an agent while sophomore forward O.G. Anunoby will hire representation and leave the program.

“These four young men all have unique talents and we support them in their decisions,” said new IU Coach Archie Miller. “We congratulate O.G. and hope that James, Robert and Thomas can benefit from this and make the best decision that will have a lifelong impact. As the semester winds down, we will continue to help them in any way with our priority being they continue their commitment to their academics and all eventually become Indiana University graduates.”

Blackmon was a third team All-Big Ten honoree by the media and honorable mention All-Big Ten by the coaches in 2016-17 after averaging 17.0 points overall and 16.5 points per game in league play while leading the conference in 3-point field goals made per game (3.0). He was named one of 10 finalists for the Jerry West Award and became the 50th player in IU history to surpass 1,000 career points and finished his junior year with 1,235 points, which ranks 33rd in school history.

“My ultimate goal has always been to play professionally and this is an opportunity I want to take advantage of,” said Blackmon. “This is an important process and I am excited to take part in it.”

Johnson is the most experienced Hoosiers having made 87 career starts. He is on the cusp of joining the 1,000-point club with 978 career points and was second on the team averaging 12.8 points per game and 13.2 points in Big Ten play. He was eighth in the Big Ten averaging 2.1 three-point field goals per game and also had 85 assists.

“I’m excited to go through this process and use this as a learning experience,” said Johnson. “Every player in college has the goal to compete at the highest level and I’m looking forward to what the future may hold.”

Bryant is a two-time third-team All-Big Ten selection and currently holds the IU career-record for field goal percentage at 59.2% and averaged 12.6 points and 6.6 rebounds this past year. He has started all 69 games that he has played in and also became a threat from the outside making 38.3% of his three-point field goal attempts hitting on 23 of 60 attempts after making just five treys a year ago. He was 10th in the Big Ten in rebounding and fifth in blocked shots with a team-high 52 blocks.

“I’m going to put all my energy in getting the most out of this opportunity and see what the best decision will be for my future,” said Bryant. “I love IU and my teammates, but having the opportunity to play basketball for a living has always been my dream.”

Anunoby came to IU as an unheralded recruit but quickly made an impression with his athleticism and defensive ability, especially in the 2016 NCAA Tournament. He suffered a season-ending knee injury on January 18 at Penn State and, despite the setback, has remained in most NBA mock drafts securely in the first round. He started 10 of 16 games this season and averaged 11.1 points and 5.4 rebounds. His best game of the year came with a 16-point, five-rebounds, two-block effort in a win over eventual national champion North Carolina. He injured his ankle late in that game and missed the next three games. He also had 21 blocked shots and 21 steals.

“I have enjoyed my time at Indiana and after thinking this over with my family, I believe this is the best decision for me personally,” said Anunoby. “I will always be grateful to Coach Crean, his staff, and especially my teammates for two of the best years of my life. I wish Coach Miller and the program the best of luck in the future.”