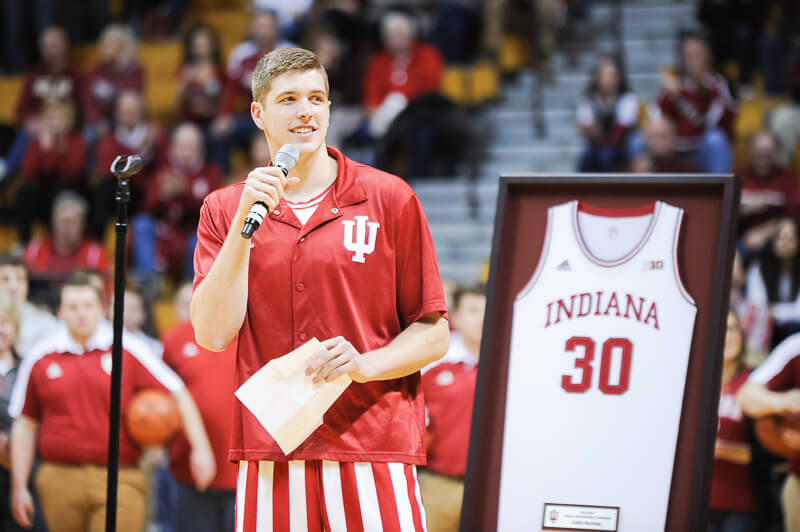 Indiana forward Collin Hartman, who missed the entire 2016-17 season with an injury, will return to the Hoosiers next season as a redshirt senior.

Hartman confirmed the news in a video on Twitter:

Hartman, who got engaged on senior night in Bloomington on Feb. 25, had left his status up in the air for next season in his last public comments.

“This is something that I had been leaning toward since before the season had ended and I needed to make sure that I could fully dedicate myself both mentally and physically to the process,” he said in a statement. “It is important that I am able to come back and perform at the level I was at before the injury occurred.”

“I’m so happy that Collin has made his decision to return to IU basketball to finish the last chapter of his basketball journey,” Hartman’s mother, Melissa Compton, said in a statement.

After playing an integral role on 2015-16’s Big Ten championship team, Hartman suffered a non-contact left knee injury during an individual workout on Sept. 20. He underwent surgery on Monday, Sept. 26.

He played several games at the end of that season with a fracture in his wrist, an injury he suffered in Indiana’s 72-69 loss to Michigan in the Big Ten tournament in Indianapolis.

His return is a major boost for first-year coach Archie Miller as he builds his roster for the 2017-18 season.

“We are thrilled that Collin has decided to come back and play next season,” Miller said in a statement. “Having an individual who has won a Big Ten championship and had success in the NCAA Tournament gives our program a big lift. He brings leadership and intangibles that can do nothing but help us achieve our goals.”

Hartman, who graduated in May of 2016, is expected to continue working towards a graduate degree.