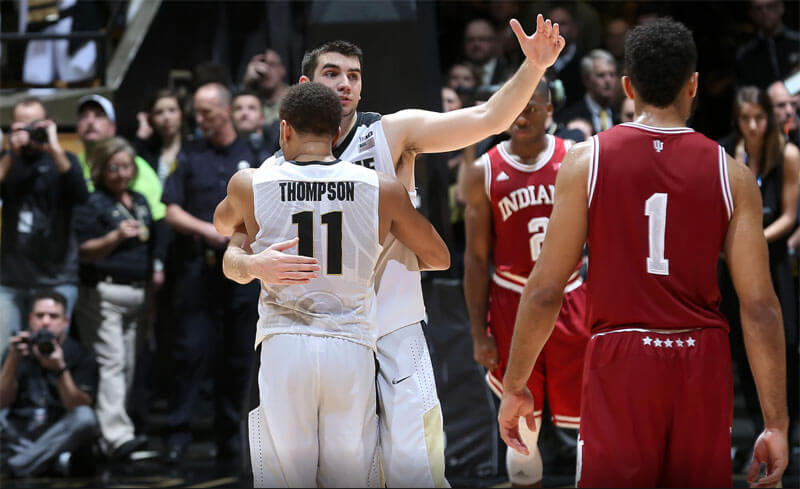 Now, it’s tournament time. 13 games over the next five days in Washington D.C. to determine who will punch an automatic ticket to the NCAA Tournament.

Before we get started, let’s take a look at the season that was by the numbers.

35 – most points scored by a player in a Big Ten game (Peter Jok vs. Indiana)

23 – most free throws attempted by a player in a Big Ten game (Peter Jok vs. Indiana), seven more than any other player.

22 – most rebounds in a Big Ten game (Caleb Swanigan vs. Minn & Derek Pardon vs. Neb)

16 – most assists in a Big Ten game (Derrick Walton Jr. vs. Nebraska)

11 – most blocks in a Big Ten game (Reggie Lynch vs. Penn State, also a Minnesota record)

7 – most steals in a Big Ten game (OG Anunoby vs. Rutgers)

12.6 – Caleb Swanigan’s rebounding average per game in Big Ten play. Swanigan was the only player in the conference to average over 10 boards per game.

+8.1 – Purdue’s scoring margin in Big Ten play, nearly three points better than any other team (Michigan came in second at +5.4)

2 – the number of buzzer beaters during the conference season (Blackmon Jr. vs. Penn State, Pardon vs. Michigan)

26.2 – the percentage of games decided by four points or fewer or in OT, the sixth highest percentage of any conference in Division I (per KenPom)

Here’s a look at where each team stands after the regular season:

Rutgers ended their regular season with a win over the Fighting Illini, but will still enter the Big Ten Tournament with the No. 14 seed for the third consecutive year since joining the league.

Tai Webster, the lone senior on the Cornhusker roster, had a rough senior night on Sunday, scoring just eight points. As bad as it was for Webster, it was even worse for his squad. The Huskers head into the postseason on a four-game losing streak, with each loss coming by 15 or more points.

The Nittany Lions have lost four straight, the latest an 11-point defeat in Iowa City. They’ll face Nebraska in the opening round Wednesday, where inevitably, one of the two coldest teams in the Big Ten will pick up a win.

In a conference that had a penchant for close games this year, Ohio State found themselves in a battle in nearly every contest. Only two of the Buckeyes’ conference games were decided by more than 10 points.

The Hoosiers avoided a first-round game in the Big Ten Tournament by holding off Ohio State on Saturday and getting some help from Nebraska. Now comes the tough part, as the Hoosiers will almost certainly need to win four games in four days if they want to make the NCAA Tournament.

A four-game Illini winning streak came to a halt on Saturday at the hands of Rutgers. All the talk of Illinois sneaking into the big dance may have been a bit premature.

Northwestern punched a ticket to their first NCAA Tournament in dramatic fashion, as Derek Pardon hit a layup at the buzzer off a full-court inbounds pass from Nate Taphorn to beat Michigan in Evanston. But the fact remains that the Wildcats have lost six of their last nine, and are going to be hard-pressed to make the second weekend of March Madness.

Michigan State dropped their final two games, both on the road, by a combined six points. A tough pill for Izzo’s crew to swallow, but one that may make them all the more dangerous now that it’s tournament time.

What got into the Hawkeyes? Iowa is suddenly the hottest team in the Big Ten after winning four straight, including road matchups with Wisconsin and Maryland. Senior Peter Jok continued dominating defenses and accumulating accolades, as he was named to the first team All-Big Ten. Jok reached double figures scoring in all but two games and was the only player in the conference to finish the season with a scoring average of more than 20.

After losing in Evanston, the Wolverines put up 1.43 PPP on lowly Nebraska last Sunday, shooting 74 percent from inside the arc and 52 percent behind it. Derrick Walton Jr., who was snubbed from the first team All-Big Ten, dished an astounding 16 assists to go along with 18 points of his own.

Going into the final week having lost three in a row, the Terrapins managed to right the ship, picking up wins in their last two regular season contests. Most importantly, Maryland secured a No. 3 seed and a double-bye in the Big Ten Tournament, so they’ll have the chance to rest before they play Friday.

The regular season may have ended with a beatdown by the Badgers, but that doesn’t diminish the Golden Gophers incredible turnaround this season. Minnesota improved from an 8-23 record in 2015-16 to 23-8 in 2016-17, earning Richard Pitino Big Ten coach of the year honors.

Wisconsin ended the regular season in a familiar position, with a double-bye in the Big Ten Tournament and an NCAA berth locked up. The Badgers still aren’t firing on all cylinders, but in a mediocre Big Ten, they’ve been just good enough to finish the regular season in second. The consistency of Wisconsin is remarkable, as they’ve now won 12 or more conference games for eight straight seasons.

The Boilermakers clinched the Big Ten title on Tuesday by dispatching Indiana and proceeded to knock off Northwestern on senior night in Evanston. They’ll enter the Big Ten Tournament with the top seed and a double-bye, but as Indiana learned last year, a No. 1 seed offers no guarantees. 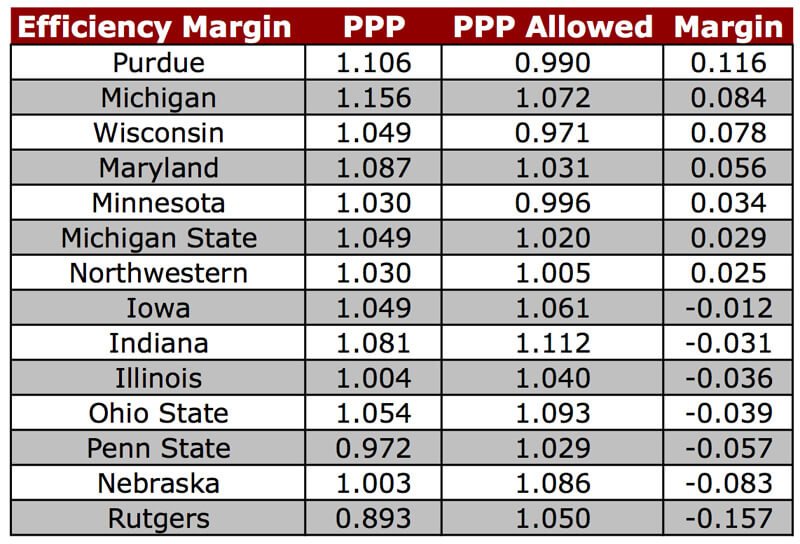