At the Buzzer: Indiana 63, Northwestern 62 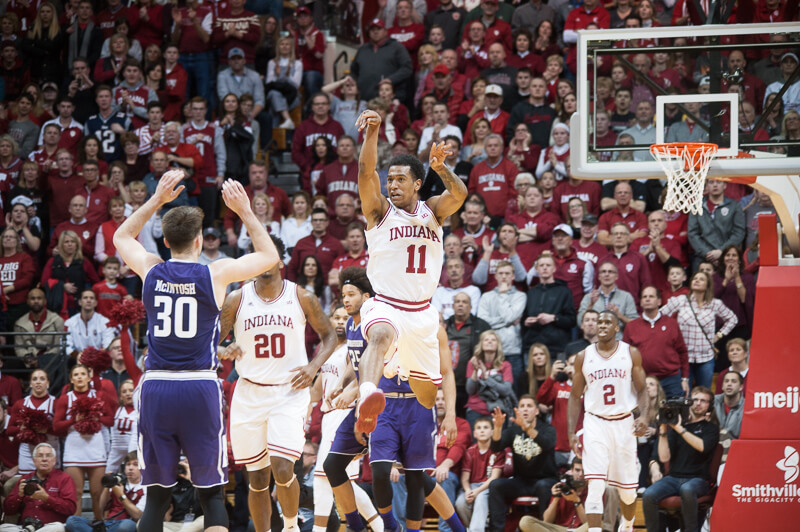 Quick thoughts on a 63-62 win over Northwestern:

How it happened: Things looked bleak early on for Indiana. Northwestern, looking to solidify an NCAA tournament berth for the first time in program history, raced out to a 26-14 lead at Simon Skjodt Assembly Hall. The Indiana faithful grew restless and boos were audible. But the Hoosiers didn’t quit. Over the last 5:01 of the first half, Indiana scored 22 points. Northwestern didn’t score. The run was capped off by a Devonte Green heave from about 70 feet out to send Indiana into halftime with a 36-26 lead. But the prosperity for the Hoosiers was short lived. It took just four second half minutes for Northwestern to trim the IU lead to four. By the 13:45 mark, the Wildcats had the lead back. And it looked like Northwestern was going to win going away. But Indiana never gave in. And the Hoosiers closed the game on a 8-0 run, punctuated by a Thomas Bryant 3-point play with 2.6 seconds left on a nifty pass from James Blackmon Jr. The win improved IU to 16-13 overall and 6-10 in Big Ten play.

Standout performer: Green scored eight points and Indiana was +19 in the 12 minutes he was on the floor in the first half. He finished with eight points, four rebounds, two steals, two assists, two turnovers and a block.

Statistic that stands out: Indiana had two major runs in this game. The Hoosiers had a 22-0 spurt to end the first half and an 8-0 run to finish off the win.