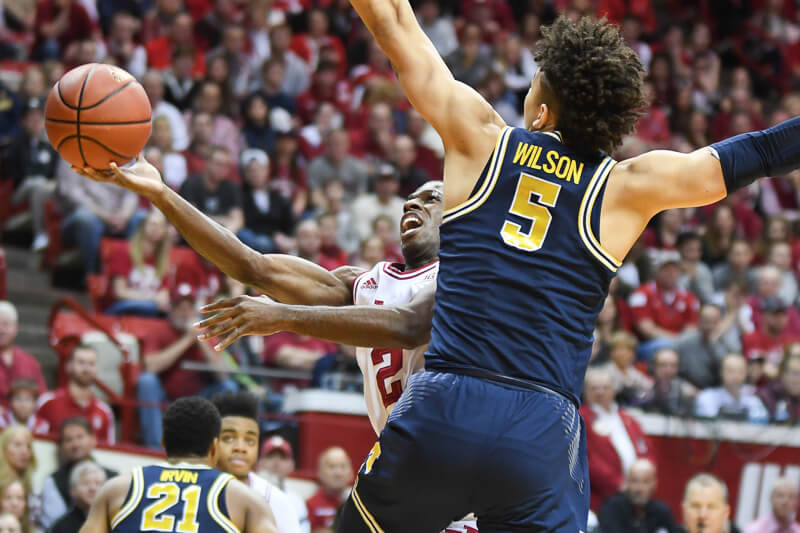 How it happened: In a game it absolutely had to have to keep its NCAA tournament chances alive, Indiana delivered a dud in Simon Skjodt Assembly Hall on Sunday afternoon. Turnovers set the tone early and Indiana never gained traction as Michigan rode strong 3-point shooting in the first half to build a 10-point lead. The second half wasn’t much better. Even as Michigan faltered offensively to begin the second half, Indiana couldn’t capitalize. The Wolverines built their built a lead of 13 with 8:30 to play and Indiana never got closer than six the rest of the way. Fans left early and boos reigned down at times. Indiana’s homecourt advantage in Bloomington, a major strength in previous seasons, is no more. Indiana has dropped four of its eight conference road games this season. The Hoosiers have now lost five of their last six games. With four of their last five on the road, Indiana’s once promising season is officially off the rails.

Standout performer: De’Ron Davis was the lone bright spot for Indiana as the freshman big man had 13 points (4-of-5 FG, 5-of-6 FT) in 14 minutes of action.

Statistic that stands out: This was Michigan’s second win in their last 19 trips to Bloomington. The Wolverines hadn’t won a true road game all season before Sunday.