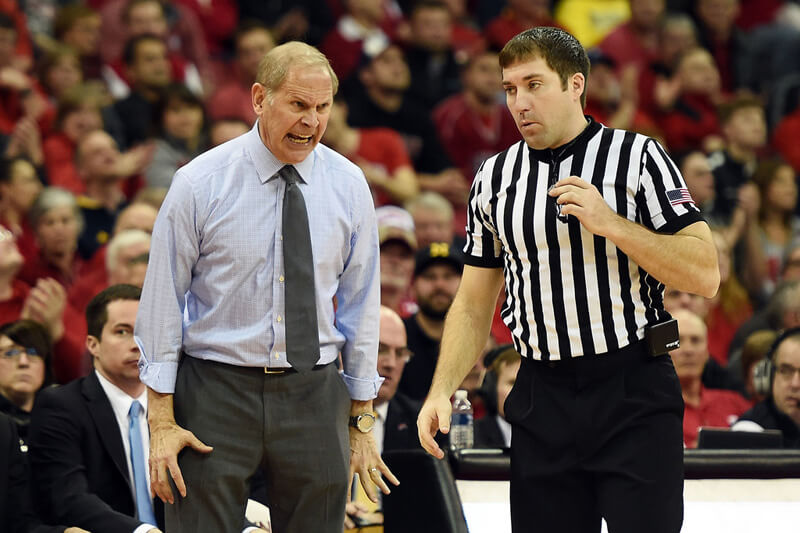 With just six regular season games to play, Indiana hosts Michigan on Sunday in a critical contest for both teams. The Wolverines are coming off an impressive 86-57 win at home over Michigan State, but haven’t won a road game this season.

The game will be broadcast at 1 p.m. ET on CBS with Kevin Harlan and Dan Bonner on the call:

Indiana’s chances to make the NCAA tournament are hanging by a thread. At 5-7 in the conference with four road games remaining, Sunday represents one of IU’s last chances to play in front of a pro-Hoosier crowd. Indiana is 15-10 overall, but has fallen out of most NCAA tournament bracket projections after Thursday’s home loss to Purdue.

Michigan, meanwhile, comes in a confident bunch following a 29-point trouncing of Michigan State in Ann Arbor. The Wolverines are also a bubble team because of their failure to win any conference road games so far. A win Sunday would put the Wolverines back on the right side of the bubble heading into their final six league games.

When CBS selected this contest as a national broadcast back in the fall, these probably weren’t the stakes the network had in mind. But even with both of these programs likely headed nowhere significant in March, Sunday’s game at Simon Skjodt Assembly Hall should still have plenty of drama.

Michigan destroyed Indiana in the first meeting between the two teams just over two weeks ago in Ann Arbor. The Wolverines hit 11-of-20 3-pointers, made 69 percent of their 2s and committed just six turnovers. To say Indiana put up no resistance defensively might be an understatement.

But Michigan is 0-6 in true road games with losses to South Carolina, UCLA, Iowa, Illinois, Wisconsin and Michigan State. Three of the losses came by 15 or more.

The Wolverines have a well-rounded offense with four players averaging in double figures. Senior point guard Derrick Walton has been terrific and leads the Wolverines in scoring at 14.3 points per game. The Detroit native is hitting 47.4 percent of his 3s in Big Ten play, which is fourth in the conference. He’s also fourth in the league in free throw shooting (87.3 percent) and in the top 10 in defensive rebounding percentage.

Entering the IU-Michigan game in Ann Arbor, senior wing Zak Irvin was Michigan’s leading scorer at 14.5 points per game. Irvin is mired in a slump and his average is down to 12.9 per game. Irvin is hitting just 26.3 percent on 3s in Big Ten games. He’s playing the second most minutes of any Big Ten player.

Junior wing D.J. Wilson is beginning to show up on some NBA draft boards and is one of the Big Ten’s most improved players. The 6-foot-10 Wilson is fourth on the team in scoring at 10.4 points per game and first in rebounding at 5.8 per game. Wilson is making 42.9 percent of his 3s and 63.9 percent of his 2s in Big Ten games.

Sophomore center Moritz Wagner had 14 points in the first meeting and is a tough matchup because of his ability to shoot from the perimeter and also take guys off the dribble. He’s not a great rebounder or shot blocker, which can make him vulnerable against physical big men, but he does an excellent job of getting to the line. Wagner’s free throw rate (FTA/FGA) is 13th in the Big Ten and he’s knocking down nearly 79 percent of his attempts. He’s also leading the Big Ten in 2-point field goal percentage at 68.6. Mark Donnal started last season, but has lost most of his minutes to Wagner. In five of Michigan’s last seven games, he’s logged less than 10 minutes of action.

Indiana and Michigan have the two worst defenses in the Big Ten and two of the top three offenses. The Wolverines have really struggled to defend on the road. UCLA put 1.59 points per trip on Michigan in LA, Iowa scored 1.22 PPP in Iowa City and Illinois scored 1.41 PPP in Champaign. Michigan’s best defensive performance on the road so far in Big Ten play was holding Wisconsin to 1.08 PPP back on Jan. 17.

But the Wolverines are an elite offensive team because of their ability to shoot and take care of the ball. Michigan teams under John Beilein ignore the offensive glass, play a deliberate pace, shoot it well and don’t turn it over.

This game, like nearly every game for Indiana, comes down to two things: Can Indiana put up enough resistance defensively and can it take better care of the ball? The Hoosiers played well enough defensively to win in their last two losses, but had turnover percentages over 20.

The KenPom projection is Indiana by 3 with a 60 percent chance of victory for the Hoosiers. Sagarin also likes Indiana by just over 3.

Michigan has won just once in its last 17 tries in Bloomington and the win was during the 2008-2009 season when Indiana finished 6-25. Looking at Indiana’s remaining schedule, it’s fair to call this a must win situation for the Hoosiers. And if Michigan wants to make the NCAA tournament, it’s not far off from that territory for the Wolverines. Michigan’s remaining games: Wisconsin, at Minnesota, at Rutgers, Purdue, at Northwestern and at Nebraska.

A healthy James Blackmon Jr. should be a major boost for Indiana’s chances to avenge the earlier loss in Ann Arbor, but the Hoosiers need a great start as the crowd is unlikely to be engaged at the level it was on Thursday against Purdue.