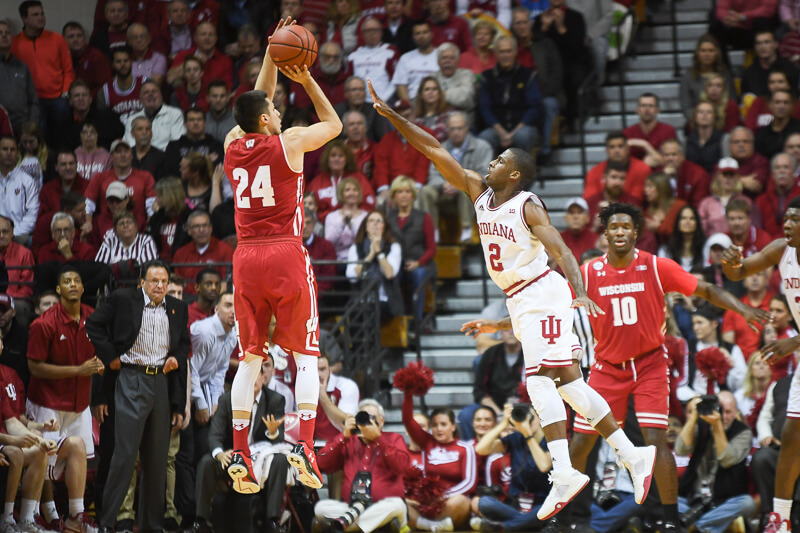 Indiana is back on the road Sunday afternoon as the Hoosiers travel to the Kohl Center to take on Wisconsin. The Badgers are 19-3 overall, 8-1 in the conference and unbeaten at home.

The game will be broadcast at 1 p.m. ET on CBS with Carter Blackburn and Clark Kellogg on the call:

In the preseason, Sunday’s matchup between Indiana and Wisconsin in Madison was viewed as one of the Big Ten games to circle on the calendar.

But as the season has played out, the game has lost some luster. Wisconsin has largely lived up to expectations. The Badgers have won six in a row and are up to No. 10 in the Associated Press top 25.

The story in Bloomington is much different. Indiana is just 15-8 overall and 5-5 in Big Ten play. Injuries have been a major factor, but the defensive struggles and turnovers play into the equation as well. Indiana hasn’t won at Wisconsin since 1998 and is 2-14 against the Badgers under Tom Crean.

The two teams met in early January in Bloomington, a game that Wisconsin led 16-2 to start and then took control of in the final eight minutes. The Hoosiers have just one true road win this season and Sunday’s contest is an opportunity to get a resume building win.

As one of the Big Ten’s most talented and experienced teams, it’s not surprising to see Wisconsin at the top of the league standings. Greg Gard, in his first full season as Wisconsin’s head coach, starts four seniors and a redshirt sophomore.

Happ is using 31.5 percent of Wisconsin’s possessions in league play and is in the top 10 of the league in both offensive and defensive rebounding percentage. He’s excellent at drawing fouls (46.1 percent free throw rate), but is hitting just 50 percent from the line in Big Ten games. He’s also first in the Big Ten in steal percentage and 17th in block percentage. Happ’s 14.5 points and 9.2 rebounds per game both lead the team.

Nigel Hayes was the preseason Big Ten player of the year, but he’s currently the third best player on his team. He’s shooting just 23.5 percent on 3s in league play and 45.7 percent on 2s. He has excelled at getting to the line, but is shooting just 60 percent there.

Vitto Brown, who averages 7.6 and 4.6 rebounds per game, is a veteran presence who is making 50 percent of his 2s in conference play. Charles Thomas, a 6-foot-8, 252 pound forward, plays sparingly as a backup. Thomas is a decent finisher (50 percent on 2s) and has knocked down 18 of his 20 free throw attempts this season.

The backcourt rotation is anchored by senior Bronson Koenig, one of the nation’s most clutch players, and veteran Zak Showalter. Koenig battled foul trouble in the first meeting in Bloomington, but still had 17 points and hit all five of his 3-point attempts. Koenig is hitting 46.4 percent of his 3s in Big Ten games.

Showalter is fourth on the team in scoring at 7.8 points per game. He’s leads the Big Ten in 2-point field goal percentage in conference games at 73.1 percent.

Ultra-athletic sophomore Khalil Iverson and freshman D’Mitrik Trice, the younger brother of former Michigan State guard Travis Trice, both play rotation minutes off the bench. Iverson is a great finisher at the rim, but can’t shoot. The 6-foot Trice is making 47.8 percent of his 3s overall, but just 25 percent in Big Ten games.

Wisconsin is the Big Ten’s best defensive unit and the Badgers are sixth nationally in adjusted defensive efficiency according to Ken Pomeroy’s stats.

The Badgers are great at forcing turnovers and do a good job at taking care of the ball themselves. For an Indiana team that has struggled mightily in both areas, it has to be a huge concern.

Indiana has put together some stellar offensive performances against great defenses this season, but the Hoosiers had James Blackmon Jr. in those games. He’s not likely to be available on Sunday in Madison.

For the Hoosiers to go on the road and win, a huge effort on the offensive glass and a strong shooting performance are musts.

Of Indiana’s eight remaining games, this is the worst opportunity for a win according to Pomeroy’s win probabilities. His model gives Indiana just a 17 percent chance of winning and favors Wisconsin by 11. The Vegas line opened at Wisconsin by 12 early Saturday afternoon and the Sagarin ratings like Wisconsin by nine.

The Kohl Center is one of the Big Ten’s most difficult venues to win in and the Badgers are 12-0 in the building this season. Given Maryland’s narrow loss at home to Purdue on Saturday afternoon, Wisconsin can remain alone in first in the league with a win.

A win for Indiana would obviously be a huge boost for the NCAA tournament resume, which currently has the Hoosiers in the field, but it won’t remain there without a few more key wins.