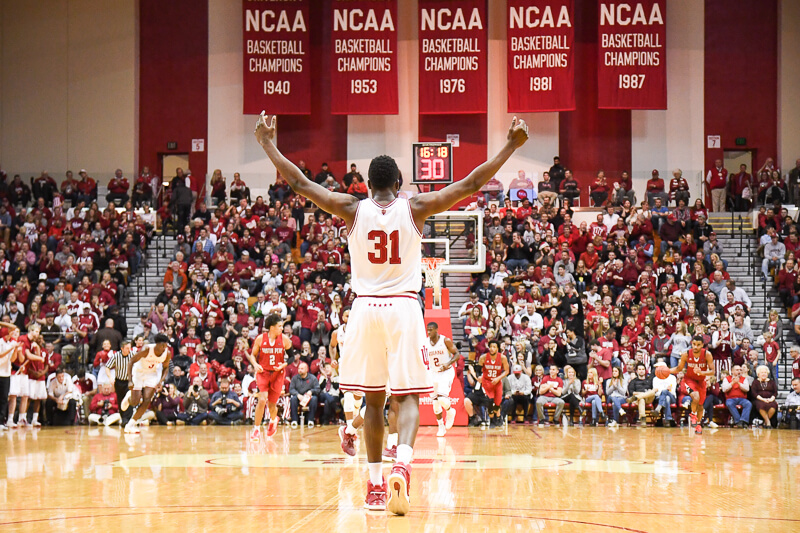 Indiana improved to 10-2 with an easy 97-62 win over Austin Peay at Simon Skjodt Assembly Hall on Thursday night.

Here’s a look at five takeaways from the victory over the Governors:

· Indiana’s 3-point shooting percentage gets a boost: After a woeful 6-of-21 shooting performance on 3s against Butler, Indiana is 26-of-52 from deep over its last two games.

The Hoosiers tied a season-best with 15 3s against Austin Peay and are now over 40 percent for the season. But can it continue against better competition? Against KenPom top 100 teams (four games), Indiana is shooting 37.1 percent from behind the arc.

We’ll soon get an answer on how well Indiana can shoot consistently from deep against better teams. After eight games against sub-250 KenPom teams in non-conference play, Indiana has just one game remaining against a team currently ranked outside the top 100.

· Morgan goes down with ankle injury: Sophomore forward Juwan Morgan tweaked his ankle late in the first half of the win and did not return.

While Morgan looked to be moving well on the ankle and was standing up throughout the second half on the bench cheering, Tom Crean said postgame that the move to not bring him back into the game wasn’t precautionary.

“He definitely hurt his ankle tonight,” Crean said. “He wasn’t able to go back in. So I’ll get an update here a little bit later.”

With five days off before the Big Ten opener against Nebraska, Morgan’s availability is a storyline going into that game.

· Indiana didn’t play well defensively: Indiana won by 35 points, but this was far from a strong effort defensively.

Austin Peay shot 47.2 percent on 2s, which is nearly four percentage points higher than teams are shooting against Indiana on average.

The Hoosiers didn’t challenge shots well in the paint, finishing with just two blocks and allowing the Governors to shoot 52 percent at the rim.

· Newkirk’s best game to-date this season: Josh Newkirk has been trying to find his way playing alongside James Blackmon Jr. and Robert Johnson and the results have been mixed to this point.

Newkirk hasn’t been great against the elite competition Indiana has faced as three of his five worst offensive games of the season came against Butler, Kansas and North Carolina.

Thursday night, however, was Newkirk’s best game so far in an IU uniform. He finished with his first career double-double (11 points, 11 assists) and had just two turnovers in 26 minutes. It’s not always easy for ball handlers to strike a balance between scoring and distributing, but Thursday’s performance was progress for Newkirk.

“I was more in attack mode,” he said postgame. “And when I saw the defense colliding I just made the simple pass.”

· Blackmon Jr., Johnson continue strong play: Indiana’s frontcourt of Thomas Bryant, OG Anunoby, Juwan Morgan and De’Ron Davis is one of the nation’s best, but the offense is currently being led by its junior guards.

The hot shooting from both players was a big reason Newkirk finished with a career-high in assists.

“We definitely work well together,” Newkirk said of Blackmon Jr. and Johnson. “We communicate well together and we just like to play off of each other.”