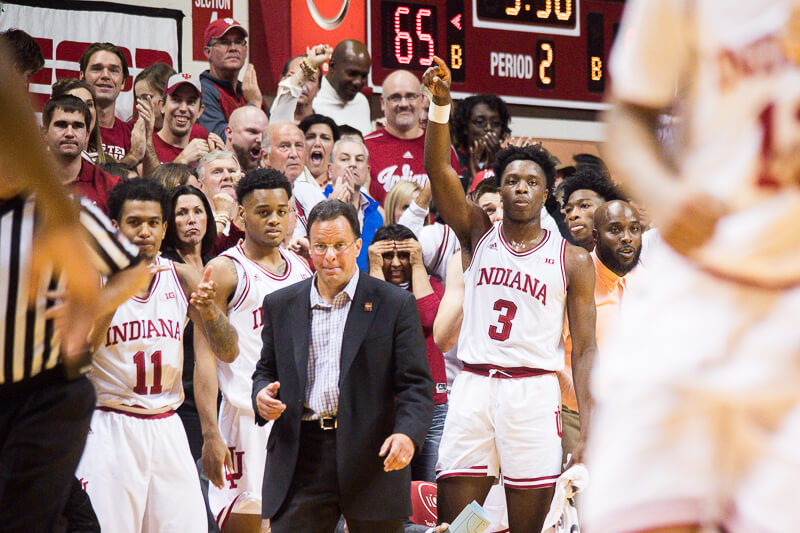 Following weeks of anticipation, Indiana finally had its chance at revenge Wednesday night when they faced No. 3 North Carolina in the Big Ten-ACC Challenge.

The Hoosiers delivered, starting the game on a 5-0 run and leading by 17 less than nine minutes into the game.

North Carolina cut the deficit to four with 4:52 remaining but the Hoosiers responded, topping the Tar Heels 76-67 and winning their 21st consecutive game inside Simon Skjodt Assembly Hall.

It was a complete effort from nearly start to finish. All five starters scored in double figures. Six players grabbed at least three rebounds. And not a single player that touched the court finished with a negative plus-minus.

It wasn’t just the team, either. The crowd was raucous, at times approaching borderline hysteria. Students, some who camped out overnight in the grass across the 17th Street, stood up for practically the entire 40 minutes of action.

“On a night like this, it never gets quiet,” coach Tom Crean said postgame.

North Carolina played a decent game but was clearly shaken by the energy of the building. The Tar Heels shot under 40 percent from the field and missed 11 free throws, including three separate times in the first half on the front end of a one-and-one.

“We were not ready for the intensity, the enthusiasm, anything that you want to talk about in the first half,” North Carolina head coach Roy Williams said. “But it was a wonderful crowd. Gosh, I’d like to play in front of a crowd like that in the (Dean) Smith Center every night other than the frickin’ Duke game.”

Indiana managed to stifle the Tar Heels potent offensive weapons, most notably Joel Berry. The junior point guard recorded eight assists but shot just 3-13 from the field was in foul trouble early in the first half.

“He’s a guy that likes to get into transition, get to his spots,” Robert Johnson said. “We wanted to contain him from the jump and I think we did a good job of taking that away.”

On the inside, the Indiana bigs held down the paint on both ends of the floor, scoring with ease and drawing fouls at the rim. Thomas Bryant fed off the crowd’s energy, scoring an efficient 12 points and grabbing seven rebounds.

After Juwan Morgan picked up two early fouls, De’Ron Davis came in at the 14:44 mark of the first half and was as poised as he’s been all season, wrapping up the night with five points and two blocks in 13 minutes.

Before Davis checked in for the first time, assistant coach Rob Judson was speaking with him at length, pointing out what the Tar Heels bigs were doing and telling Davis what to do to succeed against a standout frontcourt.

“(North Carolina) is a high-level team,” Crean said. “That’s why the foot speed, the technique, you know how you guard that pick-and-roll, how you get around in the post, all those things are important.”

It was clear that the adjustments Crean made from when these teams met in Philadelphia paid dividends. As a result, the Hoosiers now have two premier non-conference wins on their resume.

OG Anunoby was back to being an electric, high-octane force Wednesday night, using his long wingspan to make plays on both ends of the floor.

Late in the first half, Anunoby finished an alley-oop from Josh Newkirk, breaking the laws of gravity in the process.

OG Anunoby unleashed bedlam in Bloomington with this one-handed hammer. ?

But Anunoby landed awkwardly after throwing down a two-handed dunk with 96 seconds remaining, favoring his left ankle and struggling to stand up before being helped to the bench.

After the game, Crean said it was likely a high-ankle sprain and Anunoby would undergo further evaluation. His status going forward is unknown.