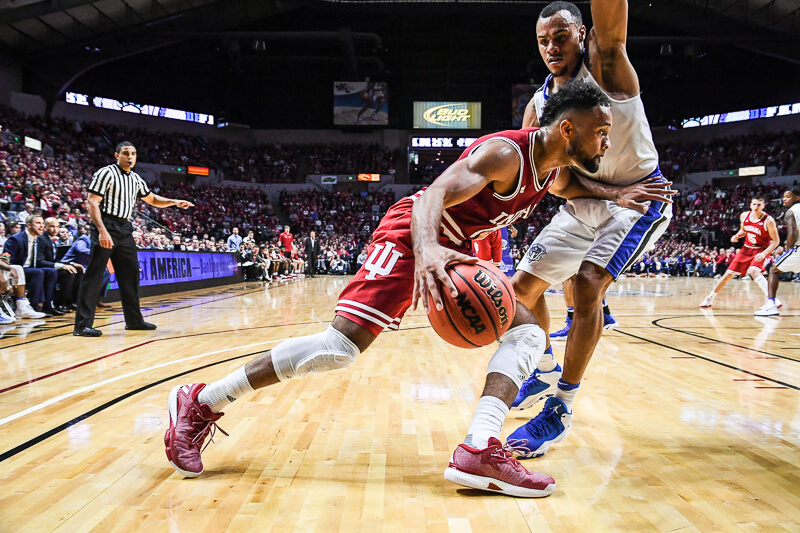 FORT WAYNE, Ind. – Indiana suffered its first loss of the season on Tuesday night at Allen County War Memorial Coliseum. The No. 3 Hoosiers, who struggled from the opening tip, fell 71-68 to the Mastodons in overtime.

· Indiana was beaten in nearly every facet: If you’re looking for one statistic that tells the story of this loss, it’s tough to pinpoint. This wasn’t a case of Fort Wayne getting hot from the perimeter and pulling off an upset. This was Fort Wayne beating Indiana from start to finish.

Among the numbers that stand out: The Mastodons outscored the Hoosiers in the paint 40-30. Fort Wayne had 12 points off of turnovers to just two for Indiana. The Hoosiers were a below average 29.2 percent on 3s. Indiana had 15 turnovers and missed eight free throws. And the leadership on the floor was lacking.

“When you’re getting a lot of praise and credit, you’re never that good and we weren’t because we’re so young and have to continue to learn and get better,” Tom Crean said postgame. “When you lose a game like this, you’re not as bad as you think you are. Everything that we have to do is controllable and it starts with that energy and it starts with that maturity.”

· A stagnant offense: Indiana’s defense wasn’t anywhere close to where it needs to be, but the offense also showed that it has plenty of room to grow.

Josh Newkirk, Robert Johnson and James Blackmon Jr. combined for 11 of the team’s 15 turnovers. The Hoosiers shot a dismal percentage from the perimeter as a team. And the ball movement was completely stagnant on several key possessions down the stretch.

And perhaps most disappointing was the fact that Indiana only scored 30 points in the paint with 18 of them coming from Thomas Bryant. When the Hoosiers are playing to their potential on offense, they utilize crisp ball movement and a game plan of playing inside-out. Neither of those things materialized on Tuesday.

· Indiana couldn’t contain straight line drives defensively: There was concern coming out of the Kansas win regarding Indiana’s ability to stop dribble penetration. All-American Frank Mason went for 30 on the Hoosiers, which wasn’t a huge surprise given the fact that he’s one of the best players in the country.

But Fort Wayne exploited Indiana’s defense with Bryson Scott and John Konchar regularly driving into the paint and getting looks at the rim. Scott was 6-of-9 on 2s and Konchar was 5-of-10.

Both were big reasons for the Mastodons winning the points in the paint battle. With an aggressive North Carolina team coming to Bloomington in a week, it’ll be a major point of emphasis for the Hoosiers in practice.

Long term, Indiana projects as a team that is going to be able to pressure the ball, get into the passing lanes and create offense from its defense. That didn’t happen on Tuesday as the two of the team’s best defenders, Juwan Morgan and OG Anunoby, had very little impact defensively.

It bears watching how much the Hoosiers are able to improve defensively in the coming weeks and months. Last season, Indiana had a total breakdown defensively in Duke and gradually turned the corner over the next month leading into conference play. Can this team make similar gains?

· This was a great event for the city of Fort Wayne: This was my first trip to Allen County War Memorial Coliseum, which opened in 1952. The venue and atmosphere didn’t disappoint.

Fort Wayne had a solid amount of fans in the building, but it was predominately Indiana fans who turned out. The Mastodons did a terrific job of keeping Indiana’s advantage there out of the game.

Credit Indiana for agreeing to the game and credit the city for a stellar job hosting one of the biggest sporting events in the city in quite some time. Despite the loss for the Hoosiers, the night was a win for college basketball in the state.