The Minute After: Liberty 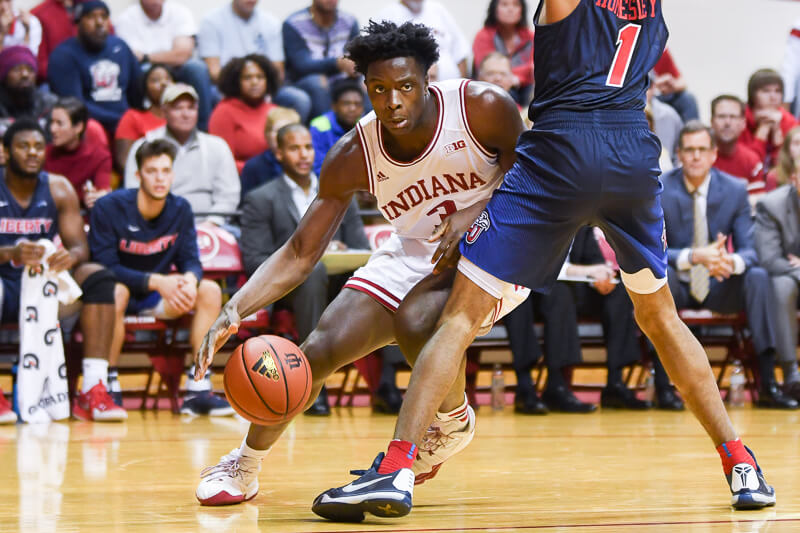 After a ho hum 100-78 win over UMass Lowell on Wednesday, it was worth watching how Indiana would come out on Saturday night against Liberty.

The Hoosiers started with a different lineup than we saw in the first two regular season games, swapping Juwan Morgan in for Josh Newkirk. Tom Crean said postgame that he’s comfortable swapping Morgan in for anyone, as he currently views his team as having six starters.

Indiana raced out to a 9-2 lead, but the start wasn’t great aesthetically. Turnovers, which would be a theme all game, reared their ugly head in the early minutes. By the first TV timeout, the Hoosiers had already accumulated five. The energy in Simon Skjodt Assembly Hall stalled with all of the mishaps.

But it wouldn’t matter as Indiana locked up Liberty defensively from the onset. By halftime, the Flames were shooting just 21.2 percent for .47 points per possession and Indiana led 45-19. That was despite a first half in which the Hoosiers committed 17 turnovers for a 42.2 turnover percentage.

When Indiana wasn’t turning it over in the first half, the Hoosiers were making shots. They hit 16 of their 25 shots in the opening 20 minutes for an effective field goal percentage of 76. Not many teams can turn it over on over 40 percent of their possessions and still lead by more than 20 at the half, but Indiana is one of them.

OG Anunoby closed in on a double-double before halftime and eventually notched the first one in his career in the second half. James Blackmon Jr. poured in 11 of his 20 in the first half, marking the third straight game the junior has scored 20 or more. He’s only the third Hoosier to do so in the last 10 years, joining Eric Gordon and Yogi Ferrell. And junior Robert Johnson came out hot offensively, hitting four of his five shot attempts before intermission for 10 points.

The second half wasn’t much different as Indiana continued to lock down the Flames defensively and continued to shoot it well from the floor. The lead grew all the way to 39 by the 6:44 mark of the second half. Liberty would finish with just .62 points per possession, which is a lower mark than any team scored against Indiana all of last season. Indiana’s defense still has plenty of room to grow, but on this night, Liberty had no answer.

The turnovers improved after half as the Hoosiers committed just nine in the second half, but the final turnover percentage (33.9) is simply too high of a number. Postgame, Crean mentioned Indiana was “hopping” and “playing too fast” on several of the mishaps.

Two games are in the books for Indiana in the Indiana Classic, this year’s exempt tournament for the Hoosiers. The next figures to be the toughest. On Tuesday, Indiana will travel to Memorial Coliseum for a meeting with Fort Wayne. It will be a homecoming of sorts for Blackmon Jr. and IU’s lone road game in the non-conference. When the polls come out Monday, Indiana is likely to be in the top five in both of them with the losses that took place in front of them this week. Through three games, it’s hard to imagine this season starting any better than it has.