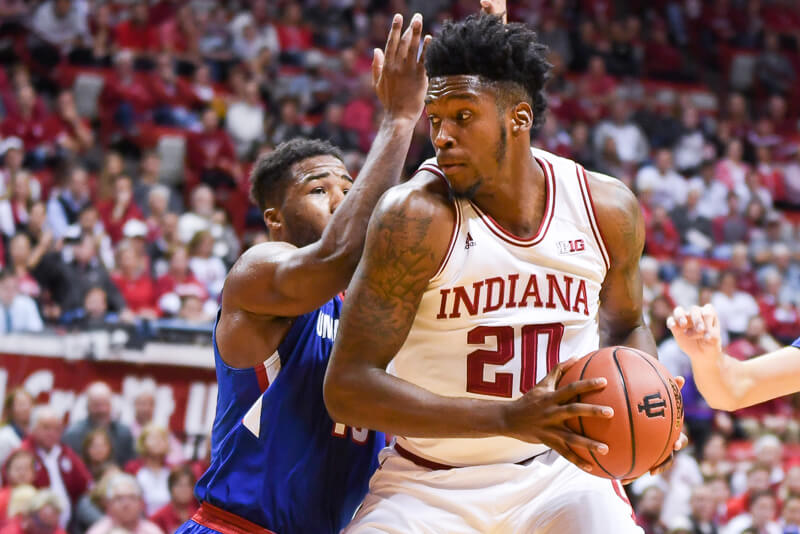 In the first of eight scheduled home contests against sub-200 Kenpom teams, No. 6 Indiana did what they were supposed to do, demolishing the UMass Lowell River Hawks 100-78 on Wednesday night.

Only five days after downing the Jayhawks in Honolulu, the Hoosiers were lethargic at the start, failing to grab attainable rebounds, taking questionable shots and lacking energy. With 9:10 remaining in the first half, the Indiana lead was just one.

The high-powered Indiana offense then found its spark, with the lineup of Curtis Jones, Robert Johnson, James Blackmon Jr., De’Ron Davis and Thomas Bryant going on a 10-0 run, with eight of those points coming from Blackmon Jr.

It wasn’t just Blackmon Jr. that boosted the Hoosiers during the run. During that 2:49 stretch, Indiana began to clamp down on defense, forcing two turnovers, swatting a shot and drawing fouls around the basket.

“It starts on defense, that’s where you can get out in transition,” Robert Johnson said. “Once we get stops, specifically defensive rebounds, we can get in transition and play.”

Following the run, Indiana continued to pounce all over the inferior River Hawks and went into the break up 53-36.

By the time it was over, 14 different Hoosiers logged minutes, with 11 recording at least one made field goal (Zach McRoberts, Grant Gelon and Quentin Taylor the exceptions). Even Tim Priller got in on the action, tipping in a missed shot with 1:07 to go.

For the second consecutive game, James Blackmon Jr. had a career night, hitting  a bevy of shots and contributing in a number of ways.

The junior scored 23 points on the night, making 8-of-12 shots from the floor, including 5-of-9 from three.

But it wasn’t just Blackmon’s hot shooting that turned heads. In 29 minutes on the court, Blackmon grabbed seven rebounds and recorded three assists while holding his own on defense.

“James is a lot more explosive than what he was,” Crean said. “He could always dunk and things like that, but he’s playing with more force. He’s playing downhill more. He’s covering more ground.”

Five different freshmen played Wednesday night, and it was evident that they still have plenty of learning to do.

De’Ron Davis was the most productive of the crop, posting eight points, three rebounds and a block. Davis showed off several post moves and the potential to be a future lockdown defender.

“He’s got great feet and he’s got very good hands,” Crean said. “He’s going to be a very good passer as he gets comfortable with it, but he can really get out and guard. I think that’s what has brought a lot of confidence to his teammates and on the court.”

After shining in the exhibition contests, Devonte Green once again showed Simon Skjodt Assembly Hall what he is capable of in the years to come. Green scored just six points but hit three of the four shots he attempted, including a ridiculous one-handed slam.

Heck of a way to score your first career points at Simon Skjodt Assembly Hall (@ChefBoyArGreen).