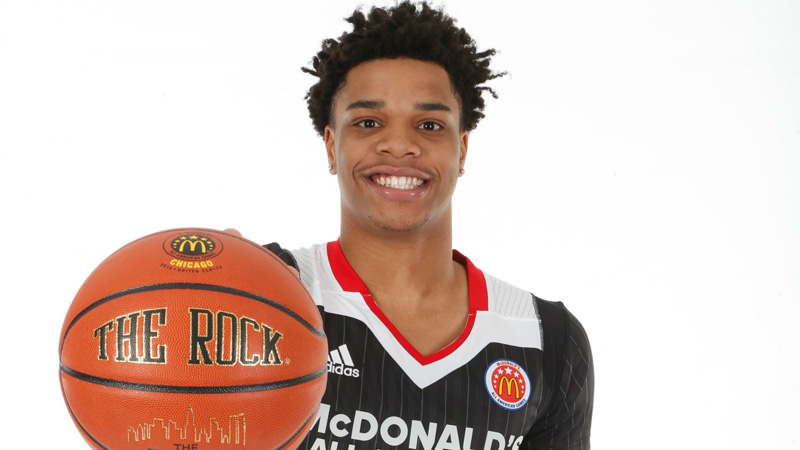 The Big Ten will have several teams that are retooling next season. The conference lost four of its top five players to graduation in Denzel Valentine, Yogi Ferrell, Jarrod Uthoff and A.J. Hammons. However, reinforcements are on the way for several programs.

In no particular order, here’s a look at five newcomers we expect to make an impact next season in the Big Ten:

· Miles Bridges, Michigan State: The jewel of Tom Izzo’s 2016 recruiting class, Bridges was a must-have recruit for Michigan State. A native of Flint, Bridges spent his final three high school seasons at Huntington Prep in West Virginia. He had his pick of any school in the country, including Kentucky, which recruited him diligently. But ultimately, Izzo and the Michigan State staff won out in the battle for Bridges.

So what does Bridges bring to East Lansing? Given what the Spartans lost – Valentine, Bryn Forbes, Deyonta Davis and Matt Costello – he might be the best player on Michigan State’s roster right away. The 6-foot-6 forward plays with an incredible motor and finishes above the rim with ease. He’s also a very active rebounder, which should translate well in Michigan State’s system. The No. 10 recruit nationally in the final RSCI rankings for 2016, Bridges enters the season as a frontrunner for Big Ten freshman of the year.

· Josh Langford, Michigan State: Not far behind Bridges in the recruiting rankings is Langford, the No. 20 recruit in the final RSCI rankings for 2016. He joined Bridges on the 2016 McDonald’s All-American team. The duo are the 13th and 14th players who have earned that honor to play for Izzo at Michigan State.

A 6-foot-5 combo guard, Langford is a very good ball handler. He’s also an elite shooter. Without Valentine and Forbes around to fill it up for the perimeter, Langford will be a go-to option for Michigan State immediately. Perhaps the most impressive trait in Langford’s offensive game is that he can score not only from distance and at the rim, but he can also operate in the midrange.

· Amir Coffey, Minnesota: Let’s be clear: Minnesota will have little impact on the Big Ten race next season. But that’s part of what earns Coffey a spot on this list. His opportunity to make an impact will be significant. The Golden Gophers return a solid contingency of guards and wing players, but none of them have the potential of Coffey, the No. 40 player in the final RSCI rankings for 2016.

At 6-foot-7, the versatile wing led his high school team, Hopkins, to a class 4A title as a senior on his way to being named Mr. Basketball in Minnesota. He was also named a Jordan Brand All-Star. In a critical season for Richard Pitino, he’ll need to sell the future to keep his job (and the few supporters he has left in the fanbase). As a result, Coffey should be featured prominently.

· Kevin Huerter, Maryland: Huerter is another top 55 recruit coming into the Big Ten and his presence on the list is due to the combination of his talent and opportunity in College Park. The 6-foot-6 shooter from New York is a member of the USA U18 men’s team currently participating in the FIBA Americas U18 championships in Chile. Mark Turgeon is an assistant for the team, but Huerter’s inclusion on the roster wasn’t a favor to Turgeon. Huerter’s play in the training camp for the U18 team already has NBA scouts keeping close tabs on him.

Maryland is going to look much different next season without Diamond Stone, Jake Layman, Robert Carter and Rasheed Sulaimon. But the return of Melo Trimble should allow Huerter to flourish as a shooter. Teams won’t be able to help off of Trimble and Huerter will benefit as a result. And there will be plenty of shots available with the graduation of Sulaimon and Layman.

· Josh Newkirk, Indiana: The lone transfer on our list, Newkirk has been drawing favorable reviews this offeason from the IU coaching staff and teammates. He returned from microfracture surgery earlier this year and is expected to compete for a starting job in Bloomington. After a disappointing sophomore season at Pittsburgh, Newkirk opted to transfer to Indiana and the system he’ll operate in under Tom Crean should be a much better fit for his style of play.

A speedy point guard, Newkirk is capable of thriving in the open court and shouldn’t have a problem finding shooters on the perimeter. His perimeter shooting is a question mark, but his defense and experience will earn him minutes on a team that should be right in the thick of the Big Ten race.