Four-star wing Jordan Tucker on IU: “They really want me” 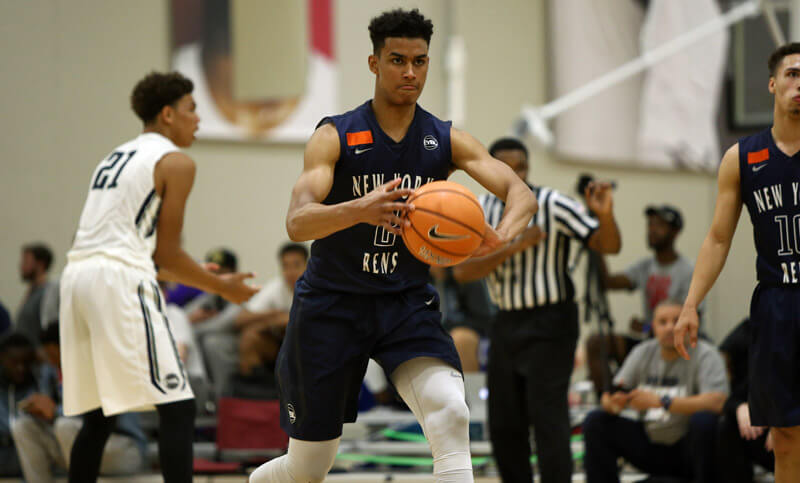 One of the top wing players in the 2017 class was in Bloomington earlier as Archbishop Stepinac (NY) took an unofficial visit to the IU campus.

Last weekend, he was in Westfield for the second Nike Elite Youth Basketball League (EYBL) session where he teamed with five-star guard Hamidou Diallo on the New York Rens.

Formerly an adidas-sponsored program, the Rens are playing in the EYBL this year for the first time and Tucker made the move over from the New York Lightning, another EYBL program.

He mentioned Indiana as one of the schools most active in his recruitment in an interview in Westfield last weekend. The Hoosiers offered him a scholarship last May.

“They’re very high on me. They really want me,” Tucker told Inside the Hall. “They just want to get me into the program so that they can develop me. Tom Crean said I can be a special player so he wants to try to make it happen.”

Thank you Coach Crean & @IndianaMBB for the great experience in Hoosier town today, definitely will be back soon?? pic.twitter.com/2GkrABhK91

On the EYBL circuit, Tucker is averaging 12.3 points, 4.1 rebounds and 1.6 assists per game as the Rens are off to a 5-2 start and firmly in the mix for a berth in July’s Peach Jam.

In addition to the heavy interest from Indiana, Tucker mentioned Syracuse, Maryland, Villanova, Oklahoma, USC and St. John’s as some of the schools most involved in his recruitment.

Along with Diallo and Quade Green, Tucker is scheduled to take an unofficial visit to Syracuse today and the Orange have prioritized him on their list of targets.

“I’m a New York kid. They’ve been on me since I was a freshman,” he said. “They think I can fit perfect in their system as far as being a scorer, shooter and someone that can be very impactful in their zone.”

Tucker, who holds offers from more than 30 programs, hopes to use the rest of the spring and the summer to continue working on his game so that he’s ready to make a major impact when he begins his college career in the fall of 2017.

“I think just working on my athleticism and playing hard throughout the whole game,” Tucker explained. “Sometimes I miss shots and let it get me down, but I just need to keep going.”