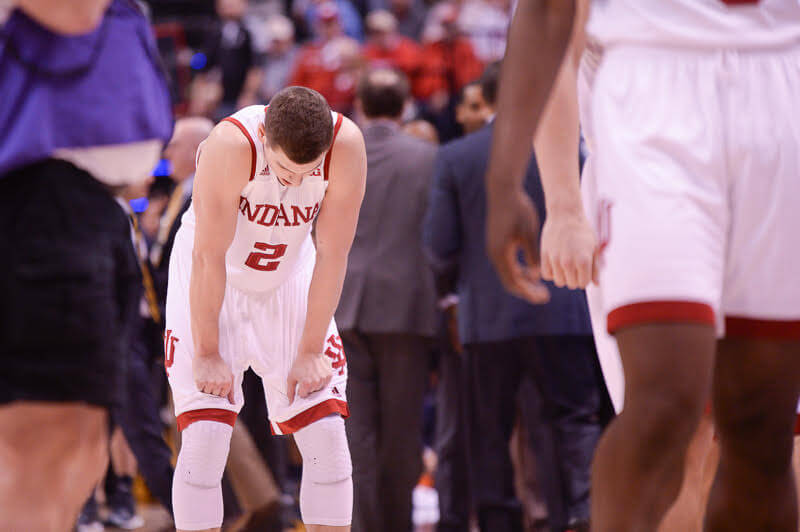 Survive and advance. It’s March. It’s the name of the game as the Hoosiers enter the postseason. They learned that the hard way on Friday against No. 8 seed Michigan in their Big Ten Tournament opener.

The Wolverines were fighting for their NCAA tournament hopes. They played like it, too.

After two late corner 3-pointers from Duncan Robinson and a buzzer-beater from Kameron Chatman, compounded with an Indiana turnover with 21 seconds left — an issue that plagued the team all afternoon — Michigan shocked the top-seeded Hoosiers 72-69 at Bankers Life Fieldhouse.

It was a game, though, that the Hoosiers found themselves on the back foot for from the beginning.

Early turnovers allowed the Wolverines to start fast, to an 8-2 lead with four of those points off Hoosiers turnovers. They guarded tight on ball screens and forced the Hoosiers into poor shots — both in the paint and out.

But most importantly, Michigan made the most of its opportunities. In other words, it embraced the essence of March.

Indiana struggled with that.

Just in the first half, Michigan scored 16 points off nine Indiana turnovers. And even when the Hoosiers did force Michigan turnovers, the Wolverines matched the intensity.

Even after scoring off Michigan turnovers in the first half, the Hoosiers were never able to follow it with another basket. They did it twice in the second half — the first, the Wolverines matched it in a frantic stretch before the under-16 timeout, and the second time, it gave the Hoosiers a 66-61 lead late.

But much like Michigan did all afternoon, the team fought like the game was its last. As Indiana coach Tom Crean said at halftime, Michigan was cutting harder. It played like a desperate team.

Out of a timeout with 2:03 left, Robinson found open space off a weave and drove to the basket. He was fouled, and his layup went in. On the Wolverines’ next trip down the floor, after a Yogi Ferrell layup, Derrick Walton forced a foul on Thomas Bryant. He made both free throws, and Indiana missed one-of-two at the other end.

Suddenly, a five-point lead became three, and then Robinson’s corner three tied it. Anunoby’s turnover gave the Wolverines a chance to win.

And like a team that was playing with its season on the line, Walton found Chatman in the right corner with just .2 seconds remaining. The rest is history.

Michigan played like a team that knew the stakes of Friday’s game. Indiana simply never found its footing.

That won’t be acceptable come next weekend. The Hoosiers found out the hard way on Friday.

Lesson learned. On to the NCAA tournament.