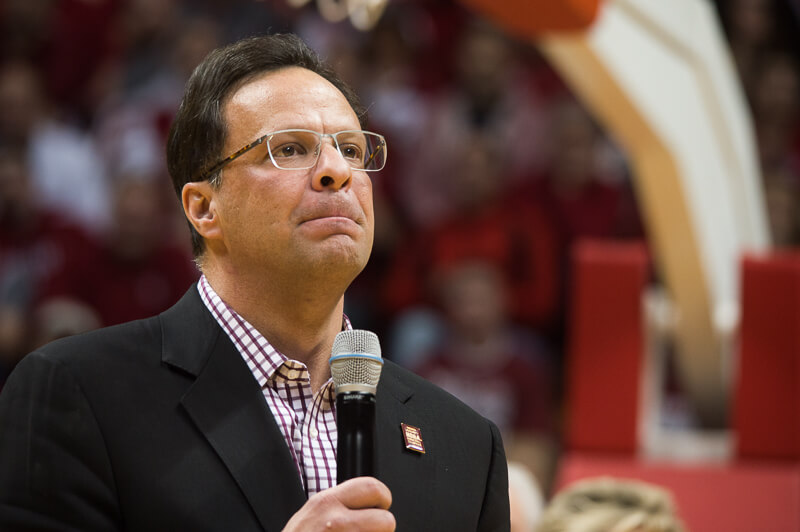 Tom Crean was at the Holiday Inn in Bloomington with Don Fischer for the final “Inside IU basketball with Tom Crean” program that has been held every Monday night throughout the season. Some of the highlights from the show are available below:

On winning Big Ten coach of the year:

“There’s a couple of awards I’d trade it for. Now Denzel (Valentine) is certainly deserving of player of the year, there’s no question about it, but I would trade it for Yogi (Ferrell) to have gotten that or it had been a tie, with the season that he’s been having. But there are a couple awards that are really program awards, it’s player of the year, because the player can’t do it without his teammates, and coach of the year. Coach of the year can’t do it without their players or staff. I’ve been a part of some great staffs in the past, I was raised by great head coaches, and when you’ve got a great staff you’re so thankful every day for that, and that is what we have from top to bottom.”

“Max and Nick (Zeisloft) for the whole year have been like starters. To me it’s awesome, to get someone who’s done what Max has done. Coming here and giving to us what he’s given, and buying in to what we needed to change, what we wanted to change, to help him be better. Coming in here and establishing that he was going to be, whether it was the role of big brother, whether it was the role of brother, or role of leader. We never needed him to come in and be a babysitter, we didn’t need him to come be an independent contractor, we needed him to come dive in and be a teammate. And that’s exactly what he’s done. He’s got a degree from Michigan and a masters from Indiana, it’s hard to beat that.”

“Maryland’s become a huge measuring stick in the Big Ten because of their talent. Now they’re not the only ones, but they’re one of them. We were ready for that, and we had a good week. We had to deal with a little bit of injury, a little bit of sickness, but we weathered that. And I give Tim Garl and our doctors a ton of credit.”

On the Big Ten tournament:

“The big thing with the team is that we have to get better. It’s a great opportunity for us to get better. Wednesday we’ll have a full practice, it’ll be very conceptual the next couple of days, preparing for both teams. Making sure we clean up everything we need to clean up on both ends. Thursday I haven’t decided yet what we’ll do. In the meantime there will be film, lifting, the whole deal to make it as normal a week as we can.”

“Juwan (Morgan) couldn’t have gone today, but it’s not nearly… it’s crazy, it happened on a deflection. He was in pain like I’ve not seen him in since we’ve had him at Indiana. I was frightened for him. He was in a lot of pain. He responded from that and today he was much better even though he didn’t practice. Robert (Johnson) is getting better. I was giddy yesterday and I was happy today with the progress he’s making. I thought he did an excellent job. What a timeline is? I can’t give that. Every little step is good.”