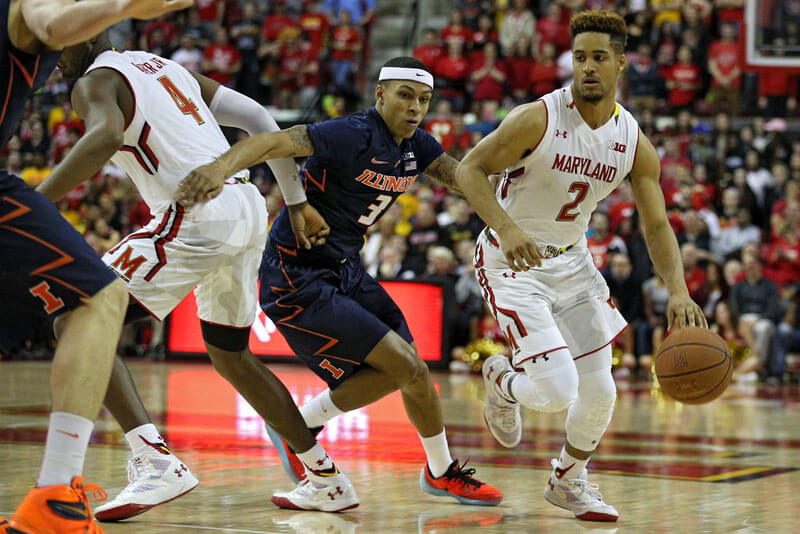 Indiana concludes the regular season schedule on Sunday afternoon at Assembly Hall with a Senior Day matchup against Maryland. The Terrapins, ranked No. 14 in the latest Associated Press top 25 poll, are 24-6 and 12-5 in Big Ten play.

The game will be broadcast at 4:30 p.m. ET with Ian Eagle, Bill Raftery and Tracy Wolfson on the call:

The Big Ten regular season championship already belongs to Indiana, but the Hoosiers still have plenty to play for on Sunday in Bloomington.

It’s Senior Day at Assembly Hall, which means Yogi Ferrell, Ryan Burton, Nick Zeisloft, Max Bielfeldt and Jackson Tharp will suit up for the final time in front of the Hoosier faithful and deliver speeches postgame. But IU can’t afford to get wrapped up in the emotion of the day. There are legitimate NCAA tournament seeding implications on the line for Indiana if it can beat Maryland and secure a sixth top 50 RPI win.

Maryland, on the other hand, is also playing for NCAA tournament position as well as seeding in the Big Ten tournament. A win in Bloomington, combined with a Wisconsin loss in West Lafayette, would give the Terps the No. 3 seed in Indianapolis and a loss would put them in the No. 4 spot.

After a season which started with several low points that have now been mostly forgotten due to a turnaround that led to an outright Big Ten championship, March is here and every game now matters even more.

The Maryland attack is led by point guard Melo Trimble, the league’s preseason player of the year who has struggled at times in his sophomore season.

Trimble leads the Terps in scoring in league games at 14.5 points per game, but is shooting just 44.7 percent on 2s and 29.2. percent on 3s. He’s still one of the best at getting fouled in the league with a 41.2 percent free throw rate (FTA/FGA) and is knocking down 86.6 percent of his attempts from the line.

A big part of Trimble’s game on offense is making plays as the pick-and-roll ball handler. According to Synergy Sports, he’s scored 150 points on 171 such possessions this season, which ranks him in the 76th percentile nationally. After posting three straight awful performances against Wisconsin, Minnesota and Michigan, Trimble has played much better in Maryland’s last two games against Purdue (19 points) and Illinois (18 points).

His running mate in the backcourt, Rasheed Sulaimon, is a streaky shooter who can fill it up when he gets hot. Sulaimon is 42.6 percent on 3s in Big Ten play, which ranks ninth in the league, but just 43.8 percent on 2s. His 11.6 points per game rank fourth on the team, which speaks to Maryland’s balance offensively.

Sophomore reserve Jared Nickens is a 6-foot-7 wing shooter who may finally be finding his touch. Nickens is just 28.1 percent on 3s in conference play, but is 9-of-16 over Maryland’s last three games. Sophomore point guard Jaylen Brantley is Trimble’s backup who plays just 8.2 minutes per game.

Layman has been very efficient this season and is knocking down close to 40 percent on 3s and 60 percent on 2s against Big Ten foes. Carter is more physical than Layman, but brings similar production from an efficiency standpoint. Carter, one of Trimble’s favorite options to find in the pick-and-roll, is hitting 37.5 percent of his 3s and 58.5 percent of his 2s. He’s a solid, but not great rebounder on both ends with a 7.6 OR% and a 19.4 DR%.

Stone is another favorite of Trimble’s in the pick-and-roll and is the Big Ten’s sixth best offensive rebounder. His 13.8 points per game rank second on the Terps in league play and he’s making 55.8 percent of his 2s. Junior Damonte Dodd is Stone’s backup after starting last season.

Maryland owns the Big Ten’s best defense, but the Terps aren’t always great defensively away from the XFinity Center. In three of their four Big Ten road losses, they’ve given up more than 1.12 points per possession and were most recently torched for 1.26 points per trip at Purdue.

Maryland also doesn’t force many turnovers, which is very similar to Purdue, another very good defensive team. The Boilermakers came to Assembly Hall giving up just 1.01 points per trip on average in Big Ten games and the Hoosiers scored 1.24 points per possession on them. A big reason for that performance was Indiana turning it over just four times.

KenPom likes Indiana by six with a 71 percent chance of a victory and the Sagarin prediction is Indiana by five.

There will be some tough matchups defensively for Indiana in this game, particularly if Robert Johnson remains sidelined with an ankle injury. Indiana has proven it can compete with the league’s best size, but you can be sure that Maryland’s ball screen heavy offense is going to look to exploit IU’s defense.  The Hoosiers will need to be excellent with their switches and recoveries when hedging.

After a win at Iowa and an outright Big Ten title, Indiana is playing with extreme confidence as it looks defend homecourt one last time with Ferrell running the show. Assembly Hall should also be at a fever pitch in terms of energy and noise.

This team also appears to be very focused on the present as Tom Crean’s postgame speech in Iowa City immediately shifted to getting the job done on Sunday rather than the regular season title. Can the Hoosiers carry out his proclamation that there’s no way IU’s seniors won’t walk out with their heads held extremely high?