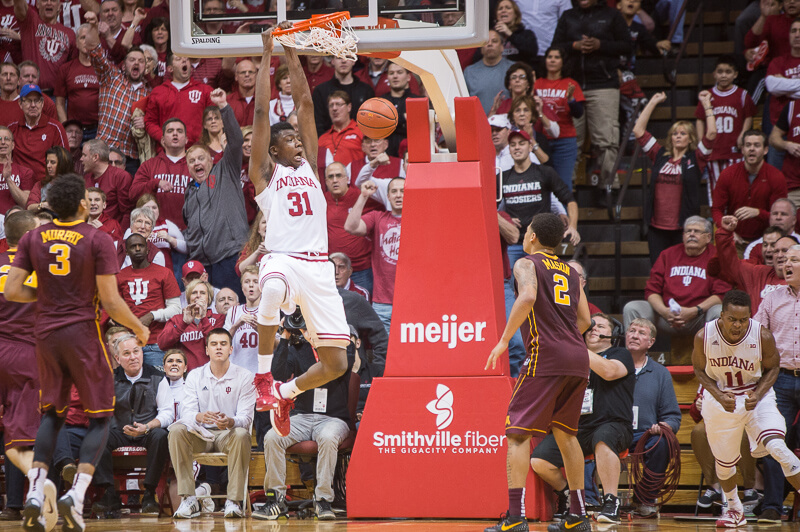 We’re back for our third installment of “Tourney Watch” as Indiana continues the back half of its Big Ten schedule.

At 19-5, Indiana has played just once since our last update – a disappointing 68-63 loss to Penn State on the road. The loss was damaging to IU’s resume, but with five of the seven remaining regular season games against Iowa (2), Michigan State, Purdue and Maryland, there are plenty of chances to pick up wins to add to the resume. With three of those games at Assembly Hall, it’s extremely important for the Hoosiers to continue to play well at home.

The Penn State loss stings, but if the Nittany Lions stay in the top 100 of the RPI (they’re 100 right now), maybe not as bad as the UNLV loss (140 RPI), which continues to get worse. Michigan has fallen out of the RPI top 50, so the Hoosiers have just one top 50 RPI win now (Notre Dame).

Despite the Penn State loss, the consensus remains that Indiana would be solidly in the field if it were selected today. The model on Crashing the Dance still has the Hoosiers with the fifth best profile among Big Ten teams behind Iowa, Maryland, Michigan State and Purdue, but as the lowest No. 9 seed.

KenPom.com, which had the Hoosiers favored in ten of its first 11 Big Ten games, projects the Hoosiers to finish 23-8 overall and 13-5 in the conference. His model projects Indiana to lose to both Iowa and Michigan State this week. He also projects Indiana to narrowly beat Purdue and Maryland at home. RPIForecast.com has the three most likely final regular season records for IU as: 23-8 (33.3%), 22-9 (23.8%) and 24-7 (22.9%). In its regular Tuesday update, The Only Colors gives Indiana a 67.9% chance of a top four finish in the Big Ten, which is an increase of more than five percent from last week.

The Big Ten currently looks like a five-bid league with IU, Iowa, Maryland, Michigan State and Purdue all appearing to have a solid path to dance. Michigan’s losses to IU and Michigan State complicates things for the Wolverines as they’ve moved down to the 35th at-large team on Crashing the Dance’s model. That actually puts Michigan behind Wisconsin, which is currently projected as the 32nd at-large team on Crashing the Dance.

As the season moves along, we’ll dig more into each team’s projections, but Bracket Matrix (updated Feb. 8) currently has Iowa as a No. 1, Michigan State and Maryland as No. 3 seeds, Purdue as a No. 4 and Michigan as a No. 9. Bracket Matrix lists Wisconsin as one of the “first four out.”