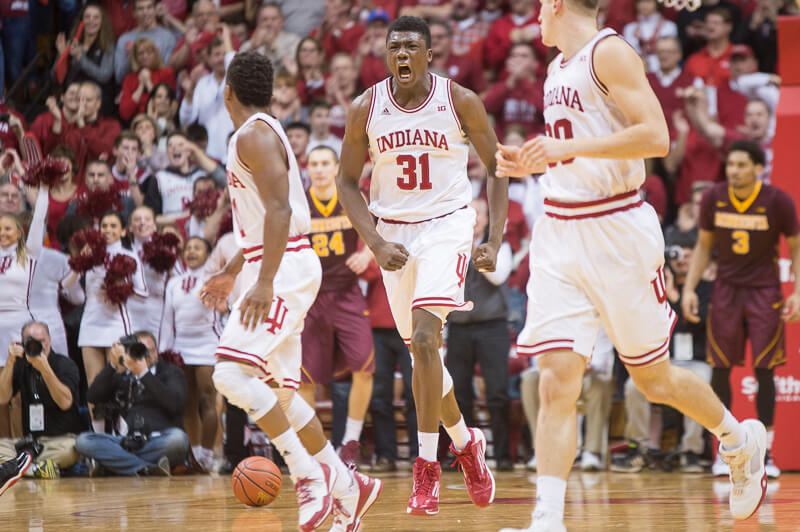 Indiana picked up its eighth Big Ten win on Saturday afternoon at Assembly Hall, but it didn’t come nearly as easy as its last three victories in Bloomington. The Hoosiers beat Minnesota 74-68, but had to overcome a poor shooting effort and shaky second half defense to prevail.

· Indiana can grow from this win: In a pretty drastic flip of the script from the last three games at Assembly Hall, Saturday’s outcome was in doubt in the final four minutes. In fact, after leading by 16 in the first half, Indiana allowed Minnesota to come all the way back and take a 67-66 lead with 3:54 remaining.

So what’s the positive to draw from what most are probably looking at as a major collapse?

Indiana had to figure out a way to win. Minnesota isn’t a good team, but the Gophers had confidence in the second half and the Hoosiers weren’t getting stops defensively. And when Minnesota took the lead, Indiana clearly had its back to the wall.

But in a game that IU teams of the last two seasons likely would have lost, this group made the plays necessary in the final two minutes to prevail. That can build confidence for a team as much as a blowout win can.

“We don’t always want to look back on last year,” Yogi Ferrell explained. “I feel like this is a new team. With this new team we have made many strides from the beginning of the season with how we want to win close games. The close games that we had early on in the season, and losing them, helped us turn those into wins now.”

· IU’s second half defense had major issues: The Hoosiers came out in a zone for the first 20 minutes and limited Minnesota to .74 points per possession.

The second half, however, featured mostly man-to-man and Kevin Dorsey and Nate Mason burned Indiana repeatedly. Without a post scoring presence, the Gophers scored 30 points in the paint in the second half. Many of the buckets were in transition and many were in simple breakdowns in the halfcourt where Dorsey and Mason went right to the basket and scored.

In the aftermath, Ferrell didn’t hold back when offering his assessment of how IU defended in the second half.

“Our transition defense was terrible,” Ferrell said. “We were not getting back at all, and we had bad matchups in transition.  Thomas (Bryant) was on the point guard and that is not what we want. We had terrible communication.”

· Bryant saves the day inside as outside shots fall short: Indiana couldn’t buy a bucket from the perimeter (2-of-18 on 3s) and still managed to eek out a win. The primary reason? Thomas Bryant.

The freshman center, who belongs in any discussion of the best freshman big man in the country, shot 11-of-13 from the field and 1-of-3 from the foul line to finish with 23 points. When Bryant catches the ball deep into the post, it’s typically a bucket. He is setting the pace nationally with a 2-point field goal percentage of 75.

“I’m always confident with or without the ball in my hands,” the freshman said postgame. “This team isn’t just around me. It’s an all around thing.”

· Hoosiers drop turnover rate after poor performance at Wisconsin: One positive of IU’s offensive profile on Saturday was an improved turnover rate. After turning it over on 25.3 percent of its possessions in Madison, the Hoosiers dropped the number to a far more manageable 15.7 percent against Minnesota.

At the halfway point of the Big Ten season, the numbers are still concerning.

Indiana is the best shooting team in the conference with an effective field goal percentage of 56.9, but is still in the cellar in terms of taking care of the ball. IU’s turnover rate of 21 percent is 2.7 percent higher than Purdue (18.3), which is ranked 13th in the league.

With the schedule toughening up significantly beginning Tuesday, Indiana needs to take care of the ball like it did on Saturday to remain a major player in the conference race.

In three previous contests against the Hoosiers, King was averaging 15.7 points. In what will likely be his final game against Indiana (unless the teams meet in the Big Ten tournament), King did not score in 25 minutes. He took four shots in 25 minutes.

On an afternoon when Dorsey and Mason combined for 42 points and were essentially unstoppable in the second half, Indiana shutting down King was a game changer.