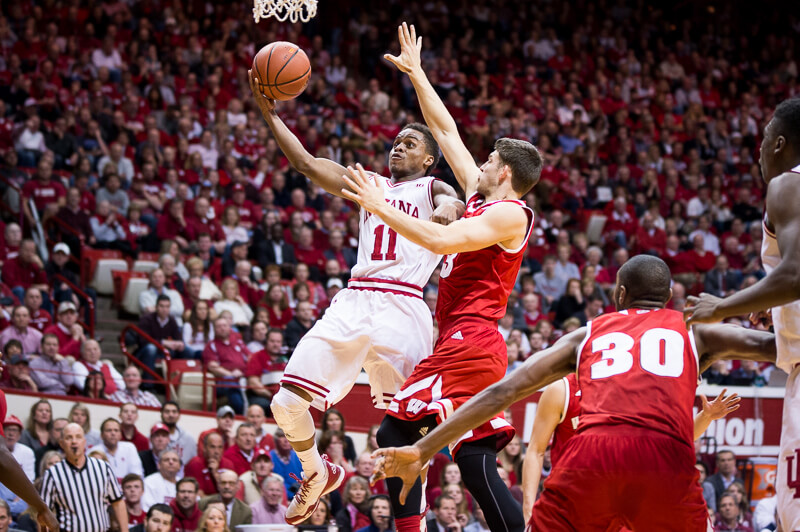 How it happened: This was a hard fought, back and forth contest that featured plenty of drama and a lot of free throws for the Badgers. Wisconsin won this game at the foul line as it made more free throws (28) than Indiana attempted (18). The Hoosiers had no answer for Nigel Hayes (31 points) and Ethan Happ (25 points) as the fouls continued to pile on all evening. Still, this is a game that Indiana could have and maybe should have won given that it had a lead late in regulation and a point blank shot at the buzzer of regulation to win it. Yogi Ferrell was terrific offensively in finishing with 30 points on 5-of-6 shooting on 3s, but got little help from his teammates from behind the arc (2-of-10 combined). The Hoosiers will look back on this game as one where turnovers – they finished with a turnover percentage of 25.3 – and an inability to put up enough resistance at the rim ultimately sealed their fate. The loss ended IU’s 12 game winning streak and extended its losing streak in Madison to 14.

Standout performer: Ferrell was the reason Indiana had a chance to win as he poured in a team-high 30 points and also tied for the team lead in rebounds with seven. He only had one assist, but his teammates didn’t help him out either as shots just weren’t falling for guys other than Thomas Bryant, who finished with 16 points and seven rebounds.

Statistic that stands out: It’s hard enough to win on the road, but when you’re opponent posts a free throw rate (FTA/FGA) of 77.1, it’s damn near impossible. That’s exactly what Wisconsin did as the Badgers took 37 free throws and connected on 28 of them.