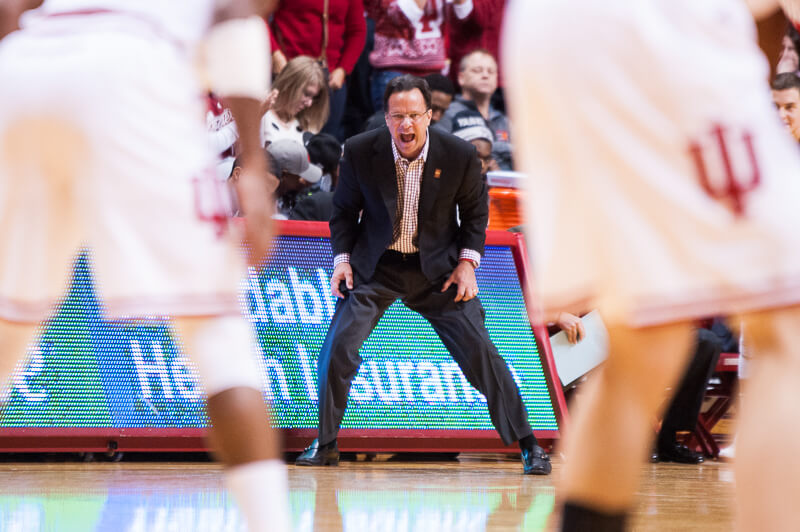 It was over before the game really got going. After starting the contest off with a 10-0 run, Indiana never trailed in its 85-60 blowout of Ohio State Sunday afternoon at Assembly Hall. IU is now 14-3 overall and tied for first place in the Big Ten at 4-0.

Good Troy Williams showed up, leading the Hoosiers in scoring with 23 points. Just as important, he had just one turnover.

“Troy played phenomenal,” Yogi Ferrell said. “I like his decision making. He didn’t over penetrate. I felt like he picked and chose his spots.”

“We don’t want Troy to slow down,” Tom Crean said. “Even with Yogi’s turnovers, there’s been too much probing instead of just attacking.”

Thomas Bryant recorded a double-double with 18 points and 13 rebounds. Throughout the entire game, IU was able to drive to the basket with its guards, draw in a second defender, and then pass to an open Bryant who has been outstanding at finishing around the rim this season.

“I improved on conditioning, and re-evaluating and learning the plays and also just learning from my teammates,” Bryant said. “They are patient with me and they push me to the limit because they know that I can be good.”

Both Ferrell and Robert Johnson were able to do that in both the first and second half. When the defender stayed with Bryant, it allowed an easy shot for whichever guard brought the ball inside.

“They were rolling today,” Ohio State Coach Thad Matta said. “They did a great job of spreading us out today. I saw some things while the game was going on, and I was like what happened?”

It was a standard game for Ferrell, who had 16 points to go along with six assists and five rebounds, but Johnson was able to come back nicely after struggling through the first three conference games. He had 11 points, six rebounds and six assists.

With James Blackmon Jr. out for the season, Johnson will be counted on as a scorer. If he can continue to score, he will fill the void, especially since he is a very solid defender. Crean said after the game that Johnson is still not fully healthy.

Defense and rebounding continues to improve

Indiana’s defense has jumped up to 71st in the country in terms of efficiency according to KenPom after a second straight game holding a Big Ten opponent to 60 or fewer points. The Hoosiers held the Buckeyes to 39 percent shooting and forced 14 turnovers. IU was able to grab nine steals and add a block as well.

IU was dominant in the rebound battle, out-rebounding Ohio State 50-31. 17 of those were offensive boards, setting up 32 second-chance points.