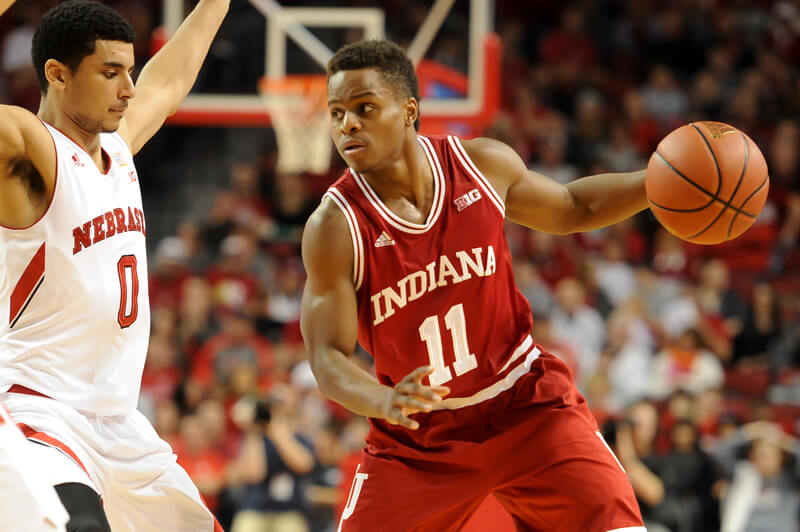 Thoughts on a 79-69 win over the Cornhuskers:

Indiana continued to be careless with the ball in the first half (23 TO%). The Cornhuskers made them pay. Nearly a third of Nebraska’s first half points came off Indiana’s miscues (12 of 39) and here we stood again: The Hoosiers fumbling the ball away in Big Ten play and failing to lead at half in a game it was favored.

But they re-grouped at halftime. There would be far less silliness in the second half. Indiana took much better care of the ball. Got great offensive performances from key pieces. And most impressive: The Hoosiers D’ed up, allowing just .83 points per possession after the break.

Save for too many missed free throws down the stretch, Indiana put together arguably its best half of the season, covered the seven-point spread and moved to 2-0 in the Big Ten.

After a forgettable performance against Rutgers he spent mostly on the bench, Thomas Bryant dominated the Cornhuskers. It was clear from the onset they had no answer for his size and skill and Indiana continued to find the freshman enough to make him a big factor (19 points on 8-of-10 shooting). He’s so efficient around the rim there’s no reason he shouldn’t be getting the ball a lot on offense. Shots from distance count for one more point, sure. But a guy shooting nearly 80 percent at the cup deserves touches. He got his this afternoon.

Yogi Ferrell was part of the turnover problem in the first half. But he was a big reason Indiana got over the hump in the second. Fifteen of his game-high 24 points came in the final 20 minutes. Ferrell hit some tough shots. A long 2 with the shot clock winding down from the right corner. Later, he created separation for himself on the right wing and knocked down the trey. Ferrell’s numbers have been good this season, but he isn’t always passing the eye test with his play and leadership. So the second half was an encouraging sign.

Indiana’s other freshmen continue to get better and were both factors in this one. OG Anunoby had 11 points (4-of-4, 1-1 from distance). He also had a steal and breakaway score in the second half. He’s earned his minutes in the rotation and then some. Juwan Morgan had just two points, but competed on defense and had a brilliant pass to Nick Zeisloft out of the post for a 3-pointer.

On defense, the Hoosiers were much better contesting at the rim. Guys were there jumping and contesting shots. Bryant had three blocks. Collin Hartman had one as well. The Hoosiers also slid into position and took charges. Shavon Shields (3-of-13) was held in check. Simply put: Nebraska didn’t get a lot of easy buckets. The Cornhuskers had to earn what they got — especially in the second half. Indiana has now held both Rutgers and Nebraska to under a point per possession to start Big Ten play without James Blackmon Jr. in the lineup.

Indiana’s been up and down in their first two Big Ten games, but it’s taken care of business with two road wins. Wisconsin looms Tuesday in what should be Indiana’s toughest test to date in conference play. But the Hoosiers will be back in Bloomington for a shot at 3-0.