What to Expect: Austin Peay 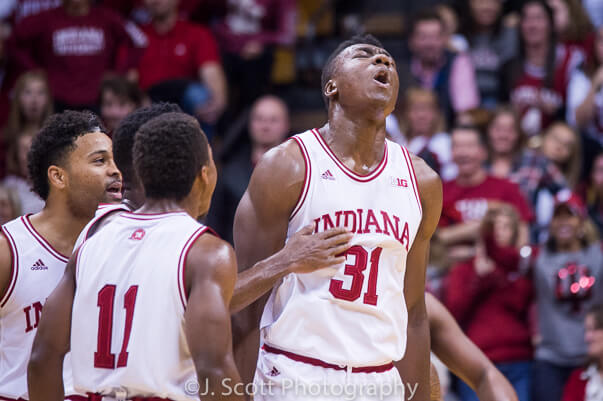 Indiana is back in action tonight at Assembly Hall against another Ohio Valley Conference (OVC) opponent in Austin Peay.

The game will be broadcast live on BTN at 7 p.m. ET with Kevin Kugler and Joe Crispin on the call.

In its final tuneup before it begins a stretch of five of six games against major conference opponents (Creighton, three in Maui and Duke), Indiana is unlikely to be challenged tonight in Bloomington.

Austin Peay is picked to finish lower in the OVC than Friday’s opponent, Eastern Illinois, and got handled easily (80-41 final) in its season opener on Friday night at Vanderbilt. Such is the life, however, for many smaller conference teams who need guarantee games like tonight’s. Collect a check, take a beating and move on.

Coach Dave Loos is in his 26th season at the helm in Clarksville, Tennessee and his 391 wins are the most in school history.

The program, however, is averaging just 10 wins over the last four seasons. And this year, at least on paper, isn’t shaping up to be much better.

The Governors do return their top three scorers in forward Chris Horton, guard Josh Robinson and guard Khalil Davis. Horton averaged a double-double last season and finished the season ranked in the top 45 nationally in both offensive and defensive rebounding percentage.

In the opener, Loos started 5-foot-11 guard Zach Glotta and 6-foot-7 forward Kenny Jones alongside the trio of Horton, Robinson and Davis.

Glotta, however, didn’t attempt a shot and had just one turnover in the opener. Jones, a JUCO transfer, had six points and six rebounds in his debut.

Guard Terrell Thompson, who is originally from Warren Central in Indianapolis, landed at Austin Peay via Wabash Valley Community College, and is likely to see major minutes off the bench.

Freshman Jared Savage, whose father Willie played for Austin Peay in the mid-90s, is a 6-foot-5 guard known for his shooting. He struggled, however, against Vanderbilt as he missed all seven of his attempts from the floor.

Austin Peay ranked just 318th nationally last season in offensive efficiency and 246th in defensive efficiency. The Governors were 346th in the country in terms of effective field goal percentage defense, which doesn’t bode well against an Indiana team that can make you pay from just about anywhere on the floor.

One thing Austin Peay did do well last season was get to the line as they finished 61st nationally in free throw rate (FTA/FGA). Beyond that, the Governors had a barren profile offensively as they were outside the top 300 nationally in both 2-point and 3-point field goal percentage.

Simply put, this is a mismatch on paper and should afford Indiana the opportunity to spread minutes around once the game is decided.

Indiana opened in Vegas as a 28-point favorite and as of Monday morning, the line sits at 27.5. Pomeroy likes the Hoosiers by 24 with a 97 percent chance to move to 2-0.

With Creighton looming on Thursday and a departure to Maui on Friday, we’ll soon learn a lot more about just where this Indiana team stacks up nationally. Tonight, however, is unlikely to produce much of a game from a competitive standpoint as the Hoosiers are simply too talented for an undermanned OVC team.