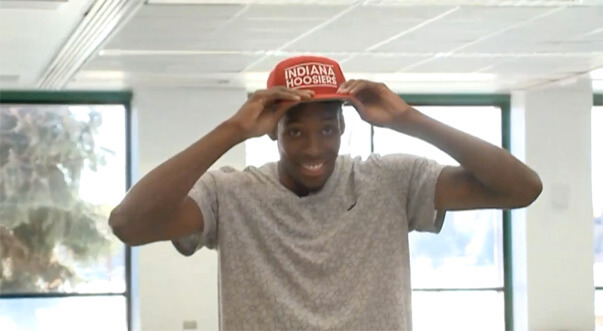 Indiana’s top recruiting target in the class of 2016, Overland (Colo.) forward De’Ron Davis, committed to the Hoosiers today in a press conference at his high school.

The announcement came after more than a three-year recruitment of the four-star forward by the IU coaching staff, which offered Davis a scholarship in 2012. The 6-foot-9 forward, ranked the No. 38 player nationally by the 247Composite, was also considering Mississippi State.

“They had a vision that this kid would turn into an impact player for them,” Overland coach Danny Fisher told Inside the Hall. “And for them to make that commitment, they had to have that vision to make the commitment they made over a long period of time.

Ultimately, the IU staff was able to convince the highly touted forward that Bloomington was the best place for his long term development.

“He’s very confident that he can have an impact on both ends of the floor immediately,” Fisher said. “He’ll have some months to spend with those guys and with coach (Tom) Crean further honing in some of his skill set and also developing some things that aren’t completely a part of him yet.

“I think he knows that his physical development and how fast he becomes just a pure physical, athletic presence is going to decide just how much of a presence he has. The plan they have for him, the way they plan to use him, he knows he can step in pretty quickly and impact the team in a positive way.”

As a junior at Overland, Davis led the school to its first ever state title while averaging 16.3 points, 11.3 rebounds and 5.1 blocks per game. In the state championship game, he scored 15 points and grabbed 16 rebounds.

On the grassroots scene, Davis starred for the adidas sponsored Colorado Hawks program. In this year’s adidas Gauntlet circuit, he averaged 13.8 points, 6.1 rebounds and 1.7 assists per game.

With the recruiting process behind him, Davis is ready to focus on his final season at Overland.

“He’s ready to move on to the next phase,” Fisher said. “I think he really learned how to respect this process. And even at times when he didn’t like it, he understood the necessity of all of it.

“He’s a good kid, he’s a mature kid, a loyal kid. He’s about team first. He’s about doing the right thing, making the right play, trying to do things the right way as often as possible. He brings a lot of high quality things to Indiana.”

Congratulations De'Ron on making your IU your college choice. pic.twitter.com/rU59nQlCLe