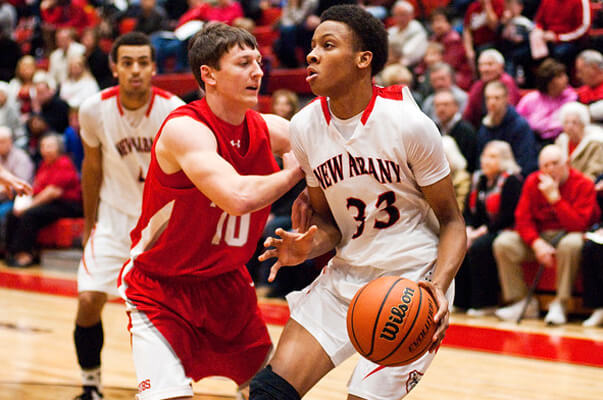 NEW ALBANY, Ind. – After a breakout freshman season, a ranking from national scouts and invitations to many top events across the country this summer, it would be easy for New Albany’s Romeo Langford to believe he’s arrived.

The class of 2018 guard averaged 17.6 points and 5.8 rebounds for Jim Shannon and the Bulldogs last season. He already owns five scholarship offers and interest from plenty of high major programs.

But Langford, ranked the No. 39 prospect nationally in his class by the 247Composite, isn’t caught up in all the hype.

“I think he’s been very humble. Certainly than most kids his age,” Shannon told Inside the Hall at a recent open gym. “Really at this age, there aren’t that many kids getting this much exposure. There are some, but there’s not a bunch.”

The 6-foot-4 Langford will again be the centerpiece this season for New Albany, which finished last season 23-3 and fell just short of knocking off Evansville Reitz in the Class 4A regional.

Entering his second high school season, Shannon is looking not only for growth in Langford’s numbers, but also in his leadership on the floor.

“I think this year, he’ll want to be a stronger leader on the court,” Shannon said. “Not just in scoring, but I think he’ll want to up his other numbers. He led us in a lot of things last year: scoring, rebounding, steals, deflections. He led virtually everything besides assists and field goal shooting percentage.”

Shannon, who is entering his 18th season at New Albany, has coached three Indiana All-Stars at the school. When he speaks about Langford, it’s clear he believes his sophomore will be the best player he’s coached.

The recruiting attention is already coming at Langford, including early offers from Indiana, Purdue, UCLA, Vanderbilt and IUPUI. Other schools who have expressed interest include Butler, Louisville, Ohio State, West Virginia, Virginia and Nebraska.

Last weekend, he visited Bloomington for his second Hoosier Hysteria. He was in Assembly Hall last season for the Purdue game and also has visited for a practice.

“I like it there,” Langford told Inside the Hall. “I just like the atmosphere of the arena and all of the fans and the players enjoying themselves.”

Indiana’s approach to recruiting Langford, according to Shannon, has been “very professional.” While coaches are not permitted to directly contact class of 2018 prospects until June of 2016, the Hoosiers are “familiar as they can be” with the rising sophomore.

“He’s familiar with Coach Crean and Coach Buckley. We’ve had some really good trips there,” Shannon explained. “Wherever he chooses to go, Coach Crean has said things to him that will help him.

“To me, that’s a sign of a really great coach and a really great person that he tells him no matter where you decide to go, and we hope it is here, but these are the things you’ve got to do if you want to get better.”