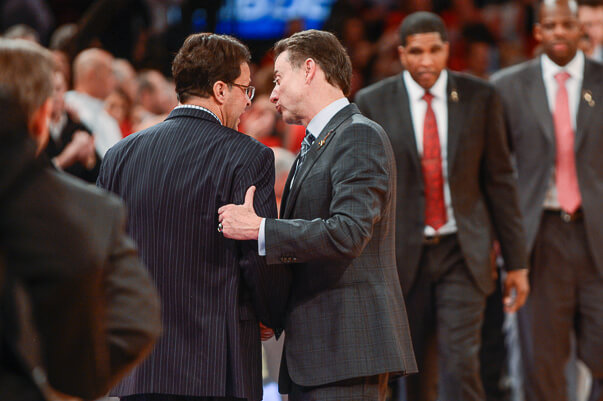 Indiana and Louisville have agreed to a multi-year series in men’s basketball, it was announced on Friday morning. The deal also includes three football games.

The two basketball programs, who have combined for eight national championships, will begin playing in 2016 with a New Year’s Eve game at Bankers Life Fieldhouse. Full details are available after the jump.

BLOOMINGTON, Ind./LOUISVILLE, Ky. – Indiana University and the University of Louisville have signed an agreement to play a three-game series in both football and men’s basketball. The football and basketball series were announced jointly on Friday by the schools from neighboring states with campuses separated by only 100 miles.

A neutral site game at Bankers Life Fieldhouse in Indianapolis on Dec. 31, 2016, will open the men’s basketball series in an equally divided arena. The Cardinals and Hoosiers will later play at the KFC Yum! Center in Louisville as a home game for the Cardinals on Dec. 9, 2017, and the teams will match up again in Assembly Hall in Bloomington on Dec. 8, 2018.

Indiana and Louisville will kick off the football series at Lucas Oil Stadium in Indianapolis on Sept. 16, 2023, with seating split equally between the two schools. The second football game will be played in Papa John’s Cardinal Stadium in Louisville on Sept. 7, 2024, and the three-game series will be completed at Memorial Stadium in Bloomington on Sept. 6, 2025.

“I’ve felt for a long time that these series were a natural for fans from both universities and I’m thrilled to see it come to fruition,” said Tom Jurich, UofL Vice President and Director of Athletics. “We appreciate the efforts of Fred Glass and his staff in helping to pull this together. We have played each other in most sports and it has been a very friendly rivalry. There are a lot of fans in Southern Indiana that support both schools who I know will particularly enjoy the competition.”

“These series are tremendous for the football and basketball programs at both schools,” said Fred Glass, IU Vice President and Director of Athletics. “Our alumni, fans, and students will be thrilled to compete against such strong programs. I really want to thank Tom Jurich and the head coaches from both schools for working with us to make these great series a reality.”

“The Louisville series will be a great challenge for us,” said Indiana Men’s Basketball Coach Tom Crean. “The preparation and execution needed to compete against Rick Pitino and his team is extraordinary. We are excited about the opportunity to face them on a consistent basis and the chance for both schools’ fan bases to watch this series take off again is exciting. That first game on New Year’s Eve next year should be special.”

“We have tremendous respect for Indiana and all of their sports programs,” said Louisville Men’s Basketball Coach Rick Pitino. “We’re very excited to have Indiana on our schedule. It’s a natural rivalry and it’s great for both universities. Tom (Crean) and I spoke about possible future games while we were together at a function last fall and I’m glad to see that it has become a reality.”

“We are thrilled to renew this regional football rivalry against Indiana,” said Louisville Football Coach Bobby Petrino. “This will be a great series for both schools, and certainly exciting for both fan bases. I know this series is something our fans have wanted for a long time, and I’m excited that both schools were able to work out a deal.”

“This is a great regional matchup against a tremendous program in Louisville,” said Indiana Football Coach Kevin Wilson. “It is awesome for both fan bases and we expect huge crowds. We also look forward to playing in Lucas Oil Stadium again. It is a win across the board.”

Both Indiana and Louisville are recognized among the top 10 men’s basketball programs of all time, with the schools combining for 18 Final Fours and eight NCAA Championships. Indiana holds a 10-7 series advantage, with Louisville winning the last matchup 94-74 on Dec. 9, 2014, in the Jimmy V Men’s Basketball Classic at New York’s Madison Square Garden. That was the first time the teams had met since 2003.

The two border foes have met twice on the gridiron, with Indiana claiming both contests played in Bloomington. The Hoosiers won the first encounter 41-28 on Sept. 14, 1985, and came back the following year to shut out the Cardinals 21-0 on Sept. 13, 1986. It will be the first meeting for the Cardinals’ football program against a team from the Big Ten Conference since falling to Illinois in 2001.