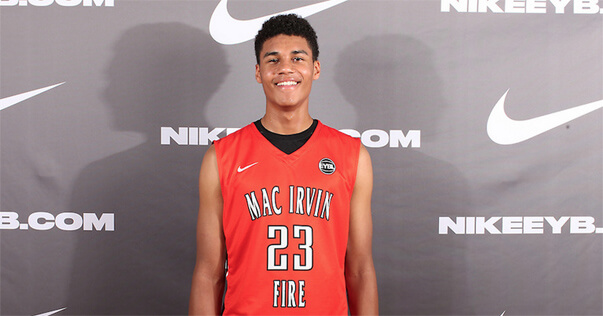 Four-star wing Justin Smith got his first up close look at Indiana basketball over the weekend.

The 6-foot-7, 185-pound forward from Stevenson High School in Lincolnshire (Ill.) and the Nike-sponsored Mac Irvin Fire program was in Bloomington on Sunday for an unofficial visit.

“It was a good experience,” Smith told Inside the Hall on Monday. “I got to spend time with the coaches, go look around the campus and they showed me film of myself, gave me pointers and advice on how to help my game.”

Smith, rated the No. 50 prospect nationally in the 2017 class, said the film session with the coaching staff was one of the key parts of his visit as well as getting a look at all of the basketball facilities.

“I enjoyed it. Getting to see all of their facilities and how good they are,” he said. “It was a good experience.”

Some of the key points Smith covered in the film session with the staff were getting out quicker in transition and how to step into his shot more effectively when he comes off of screens.

Indiana offered Smith a scholarship back in May and said he’s in regular contact with Rob Judson, who has been serving as an assistant coach since the departure of Steve McClain back in the spring.

He also has offers from Illinois, Purdue, Northwestern, Wake Forest, DePaul and Rice.

As a sophomore at Stevenson, he averaged 10.3 points and four rebounds. He had 12 points and seven rebounds in the IHSA Class 4A title game as Stevenson beat Normal, 57-40.

In 22 games this past season on the Nike Elite Youth Basketball (EYBL) circuit, Smith averaged seven points and 2.8 rebounds playing against mostly 2016 prospects. He had six double figure scoring games in the EYBL, including a 20-point effort against Team Final back in April.

“It just taught me to always play hard, every single play,” Smith explained. “Every game, no matter what is going on, the playing time you’re getting or if your shot is going in, you just have to keep playing hard.”

With several key departures from his team at Stevenson like Jalen Brunson (Villanova) and Connor Cashaw (Rice), Smith will take on a more prominent role as a junior. Becoming a more confident player offensively has been key in his development this summer.

“My one-on-one moves are a focus,” he said. “And breaking my defender down and getting to the basket and to my sweet spot on the floor.”