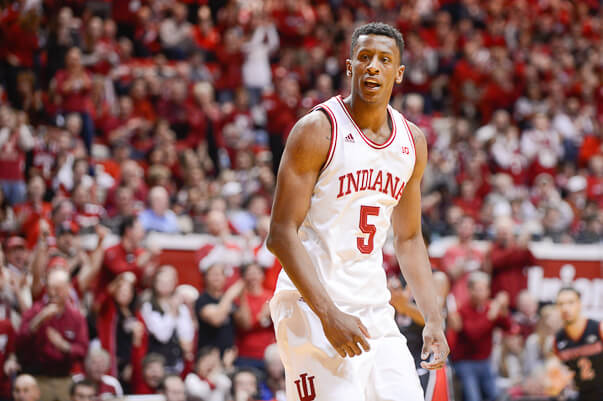 The event, billed by Nike as an “effort to create a premium and seamless basketball experience with the game’s elite,” features both high school and college players and combines Nike’s previous three skills academies into one.

According to a press release, the academy “will allow the best players in the country to compete against the best competition while receiving guidance from Nike Basketball’s biggest stars; LeBron James, Kevin Durant, Kyrie Irving and Anthony Davis to name a few. Additional basketball legends will be on hand to serve as mentors and coaches for the weeklong session with the top high school and college players in the country.”

I think Troy Williams has helped himself so far. Stroke looks good. Making plays with the ball. Athletic in transition. Lock 1st rounder.

The full roster of college participants can be accessed here.

As a sophomore, Williams averaged 13 points, 7.4 rebounds, two assists in 27.6 minutes per game and was named an All-Big Ten honorable mention selection by the coaches and media.

The 6-foot-7 forward considered a jump to the NBA following the 2014-2015 season, but opted to return for a third season in Bloomington.

He’s currently projected as a late first round pick in next June’s NBA draft by Draft Express.

MAXIMIZE YOUR MIND. MAXIMIZE YOUR BODY. COMPETE LIKE HELL. Welcome to the #NikeBasketballAcademy. pic.twitter.com/zLAANkCh3G