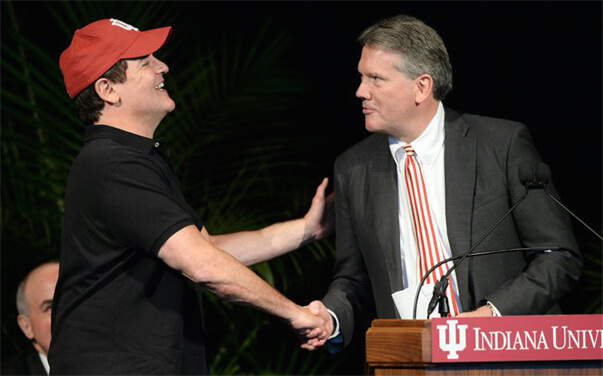 Indiana announced a $5 million donation on Friday afternoon from alumnus and Dallas Mavericks owner Mark Cuban to build a “first-of-its-kind” sports media and technology center in the west wing of Assembly Hall.

Here’s the full release from the athletic department on the project, which will be named the Mark Cuban Center for Sports Media and Technology:

BLOOMINGTON, Ind. – Indiana University President Michael A. McRobbie today announced that IU Athletics has received a $5 million gift from IU alumnus Mark Cuban to create a first-of-its-kind, cutting-edge, student-focused, video, broadcasting, and technology center. Among other things, this very generous gift will make IU Athletics the national leader in 3D broadcast and replay, virtual reality, and 3D virtual studio technologies. In honor of Cuban’s transformative gift and creative input, the center will be named the Mark Cuban Center for Sports Media and Technology when it becomes fully operational following the completed renovations at Assembly Hall in the spring of 2017.

“We are extremely grateful to Mark Cuban for his remarkable generosity and his commitment to ensuring that Indiana University remains at the forefront of preparing our graduates for highly successful and rewarding careers,” McRobbie said. “This pioneering new center will provide IU students across the university with unprecedented access to the newest and most leading-edge media tools currently available in the technological marketplace. Furthermore, it will transform the collegiate athletics experience for our student-athletes as well as the many Hoosiers fans here in Indiana and around the world.”

Housed in the west side of the future Simon-Skjodt Assembly Hall, the Mark Cuban Center for Sports Media and Technology will partner with academic units on campus to provide opportunities for students in various media and technology disciplines by allowing them to use cutting edge technology and equipment to hone their skills and produce high-quality professional content. Utilizing the center’s resources, IU students will produce a wide variety of media content for IU Athletics including virtual reality videos for fan experience, athlete instruction, recruiting videos, and social media, as well as video board displays, team specific shows, and live event broadcasts for all 24 IU sports.

“I am so excited to work with Indiana University to bring us into the future of sports media, broadcasting, and analytics,” said Cuban.

In the collaborative spirit of the center, IU Athletics will engage the broader campus community in providing student personnel and/or curriculum to support the efforts of the Center. This will be done in areas as wide ranging as virtual reality, gaming, studio production, gameday video production, motion and broadcast graphics, promotional location production, reporting and play-by-play, and game live casting. IU Athletics has already enlisted support for the Center from the Media School, IU Radio TV Services, the School of Informatics, and the Advanced Visualization Lab. Adhering to Mark Cuban’s vision, the Center will be open source and student driven to help develop in his words, “the type of students you want to hire.”

Along with his generous gift to IU Athletics, Cuban has provided his professional expertise to shape the mission and technologies to be utilized in the center. Under Cuban’s direction, IU Athletics will be among the first athletic departments in the country to adopt and utilize a wide array of cutting-edge video and media technologies.

“Mark Cuban’s name is synonymous with innovation, technology, media, and sports,” Glass said. “I cannot imagine a person better suited to be the namesake for, and godfather of, our Center for Sports Media and Technology. His extremely generous gift is transformative and will make Indiana University Athletics America’s elite institution in this field. Go IU, and go class of 1981!”

IU Athletics will be the first college athletic department to utilize “freeD™ from Replay Technologies. This technology will be installed in both Assembly Hall and Memorial Stadium this summer to give IU fans a one-of-a-kind 3D video board experience as well as enabling IU to create unique highlight and recruiting videos. “freeD™ from Replay Technologies allows for the capturing of almost an infinite scene. The camera angles are limitless and gives the director new angles that not only go around the action but also above it and even in-between the players.

IU Athletics will house virtual studios from Orad Hi-Tec Systems. Orad is a world-leading provider of real-time 3D video graphic solutions including sports production and enhancement, special events, virtual studios and virtual advertisement. IU is the first athletic department in the country to purchase and house an Orad virtual studio and the technology will be used to enhance video board elements, athlete and coaches interviews, and for pregame/halftime/postgame shows for live event streams.

“The Media School is delighted to be part of this initiative, and we are especially looking forward to the many exciting opportunities for students to gain exposure to and experience with cutting edge technologies,” said James Shanahan, founding dean of the IU Media School. “Especially in concert with activities of the National Sports Journalism Center, this gift will help Indiana attract and train the best talent in sports communication.”

Substantial investments in cameras, lighting kits, audio recording technology, video editing stations, and broadcast equipment will also be included in the center. Students will have 24 hour access to parts of the facility to provide students with quality workspace that conforms to their schedules.

The number of live streams of events and competitions, using all student crews and broadcasters, will also be greatly expanded giving all IU teams increased coverage that is beneficial in recruiting. The Orad virtual studio and “freeD™ from Replay Technologies will be used to accentuate and further professionalize these broadcasts.

Originally from Pittsburgh, PA, Cuban earned a B.S. in Management and Administration from the Kelley School of Business in 1981. After graduating from Indiana University, he relocated to Dallas, TX where he founded a computer consulting service, MicroSolutions, which he later sold to CompuServe in 1990 for $6 million.

In 1995, Cuban and long-time friend Todd Wagner came up with an internet based solution to not being able to listen to Hoosiers Basketball games out in Texas. That solution was Broadcast.com – streaming audio over the internet. In just four short years, Broadcast.com (then Audionet) was sold to Yahoo for $5.6 billion dollars.

Since his acquisition of the Dallas Mavericks in 2000, Mark Cuban has overseen the Mavs competing in the NBA Finals for the first time in franchise history in 2006 – and becoming NBA World Champions in 2011. They are currently listed as one of Forbes’ most valuable franchises in sports.

In addition to the Mavs, Cuban is chairman and CEO of AXS tv, one of ABC’s “Sharks” on the hit show Shark Tank, and an investor in an ever-growing portfolio of businesses. He lives in Dallas with wife Tiffany, daughters Alexis and Alyssa, and son Jake.

Cuban is a member of the IU Foundation Presidents Circle and lifetime member of the IU Alumni Association. In 1998, he was recognized with a Kelley School of Business Distinguished Entrepreneur Alumni Award.

This gift will be administered by the IU Foundation. The Mark Cuban Center for Sports Media and Technology is a priority of the IU Athletics capital campaign, which is part of a special university-wide initiative that will be announced in September 2015.