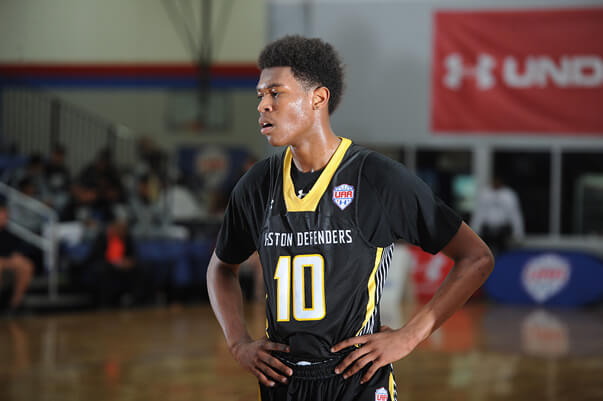 Class of 2016 shooting guard Kameron McGusty, currently the leading scorer on the Under Armour Association circuit, says Indiana is now heavily involved in his recruitment.

The 6-foot-5, 180-pound scorer, who plays at Seven Lakes high school in Katy, Texas, was offered a scholarship by the Hoosiers in a telephone conversation last week with Tom Crean.

Interest from Indiana began shortly after the first April live period, according to McGusty.

“Coach Tom Crean called me (last week) and we talked for a little bit,” McGusty told Inside the Hall. “He said he wanted to offer me a scholarship. He seems like a really good guy, a good coach. Everybody knows Indiana basketball. I’m getting to know him more and getting to know Indiana more as a school and more about their basketball program.”

McGusty has been one of the stars of the Under Armour Association circuit this spring.

“I’ve been putting in work and trying to get the confidence and killer instinct,” he said when asked about the key to his strong play this spring. “Once you know what you can do on the court, your confidence goes up.”

A big part of his focus on the court is trying to create offense from his defense.

Currently ranked as a 3-star prospect by the 247Composite, McGusty is getting plenty of new interest as a result of his strong play and is likely to see his profile raise nationally in the near future.

In addition to the offer from Indiana, he mentioned USC, Texas, Oklahoma, Cincinnati, Houston, Kansas State, Wake Forest, Purdue and Auburn as some of the schools coming at him the hardest. His most recent visit was an unofficial trip to Austin to check out the University of Texas.

“(When I take visits), I have a list of things that I look for,” he said. “I definitely look for things like academics, style of play, things like that.”