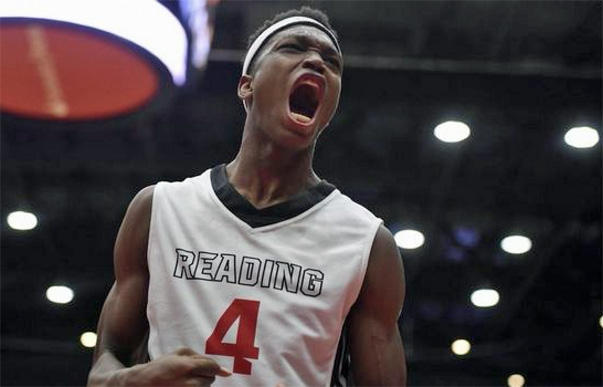 One of the breakout players from this spring’s Nike Elite Youth Basketball League (EYBL) has become a recruiting target for Indiana.

Class of 2017 Reading (Pa.) guard Lonnie Walker, who plays with Hoosier targets Lamar Stevens and Tony Carr on Team Final, averaged 13.4 points, 3.3 rebounds and 1.2 assists this spring and received an offer from the Hoosiers on May 21.

At 6-foot-5 and 180 pounds, Walker has the ability to score from both the perimeter and while attacking the rim, which makes him a difficult cover.

Scout.com named him one of the top performers of the EYBL stop in Minneapolis and wrote that “there is no doubt” he is one of the best wings in the country.

“My speed, agility and jumpshot makes it a lot easier for me to attack the rim or take a jumper,” he told Inside the Hall. “I’m working on aggressiveness and post moves, so I’m still a work in progress.”

Ranked the No. 48 prospect nationally in his class by the 247Composite, Walker also holds early offers from Holy Cross and Villanova. Maryland, Penn State, Ohio State, Syracuse, North Carolina, UCLA, Oregon and Arizona are among the programs who have expressed interest.

As a sophomore at Reading, Walker averaged 17 points, 5.1 rebounds and 4.6 assists and led his team to a 24-6 record and county title. He was named to the Pennsylvania Sports Writers Class AAAA all-state second team.

His relationship with the Hoosier staff is still in the beginning stages.

“I’ll talk to them more soon,” Walker explained. “See how the school is, the coaches, the players, just (get a feel for) the overall environment.”

While he’s currently playing on the wing and as a scoring guard for Team Final, Walker said he feels that he can play both backcourt spots at the next level.

“I don’t mind playing point guard. I used to play point guard when I was younger and got a little experience,” he said. “I’ve got really good court vision, so if I have to be a point guard to do my role, then I’ll do it.”