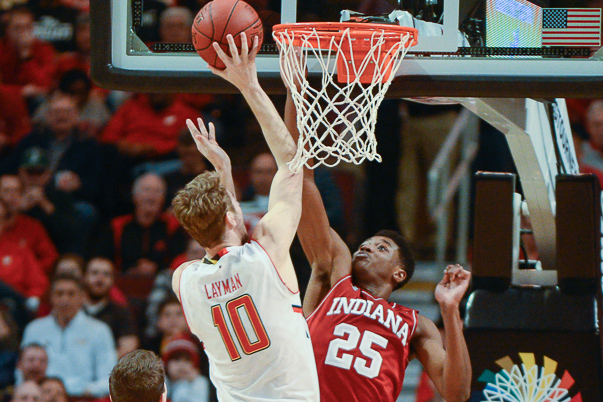 Unbalanced scheduling is one of the challenges accompanying conference expansion. With the addition of Maryland and Rutgers last season, the Big Ten was forced to move to an eight single play, five home-and-home scheduling format.

It was a dramatic change from the previous 12-team scheduling format, which allowed for seven home-and-home pairings and four single plays across the league. Last season, it didn’t matter much in determining the regular season champ as Wisconsin was the clear class of the conference and finished 16-2, which was the best record since Ohio State in 2011.

That is not likely to be the case next winter as the conference appears to have eight or nine teams with legitimate NCAA tournament aspirations and several of those programs are showing up consistently in preseason top 25s.

So how might scheduling determine next season’s regular season Big Ten champion? Using the top seven teams in John Gasaway’s conference power rankings published earlier this month over on ESPN Insider, we ranked the schedule difficulty (from most difficult to easiest) of the top half of the league for next season:

Comment: If the Terrapins win the Big Ten, it won’t be due to a favorable schedule. Of Gasaway’s projected top six behind Maryland in the standings, the Terps get four of them twice. And the other two, Indiana and Michigan State, will be road games.

Comment: The Badgers also get four of the six teams projected with them in the top seven twice, but do catch a bit of a break in getting home single plays with Michigan and Ohio State. Still, single plays with the projected bottom three teams (Rutgers, Nebraska and Penn State) makes this a difficult road.

Comment: Ohio State only gets two of the contenders for double plays, which is favorable, but their road single play schedule is brutal with Indiana, Purdue and Wisconsin.

Comment: The Boilermakers get half of the six teams projected with them in the top seven twice and then get Michigan State and Ohio State at home along with a road trip to Bloomington.

Comment: Michigan draws two of the contenders for double plays and then splits the other four single plays with two at home and two on the road. That split, however, is favorable as IU and Michigan State, both picked by Gasaway in the top three, are home games with Ohio State, picked seventh, and Wisconsin, picked fourth, on the road.

Comment: The Hoosiers made out well scheduling wise by only getting a double play with one team in Gasaway’s projected top seven in Wisconsin. Of the other five teams projected in the top seven, three are coming to Bloomington and two will be road contests.

Comment: The Spartans grab this spot (barely) because they drew single play home games with both Maryland and Indiana. While they do have a pair of double plays with teams projected in the top seven, they also drew both Rutgers and Penn State, both picked in the bottom three by Gasaway, twice.